Three-wheeled Tuk-Tuks are Bangkok’s most well known form of public transportation and still one of the best ways to explore the city, especially at night. Travel writer Deborah Dickson-Smith shares her experience on a midnight Bangkok tuk tuk tour.

Bangkok is best explored at night. It’s cooler, less crowded and with less traffic to negotiate. But also, some of Bangkok’s best-known landmarks are more spectacular viewed at night, such as Wat Arun, The Temple of Dawn, which sits on the banks of the Chao Praya River, lit up so that every gold stupa glows and reflects in the river.

For the uninitiated, the tuk-tuk is essentially a motorcycle with a fully covered carriage that seats two to three people. 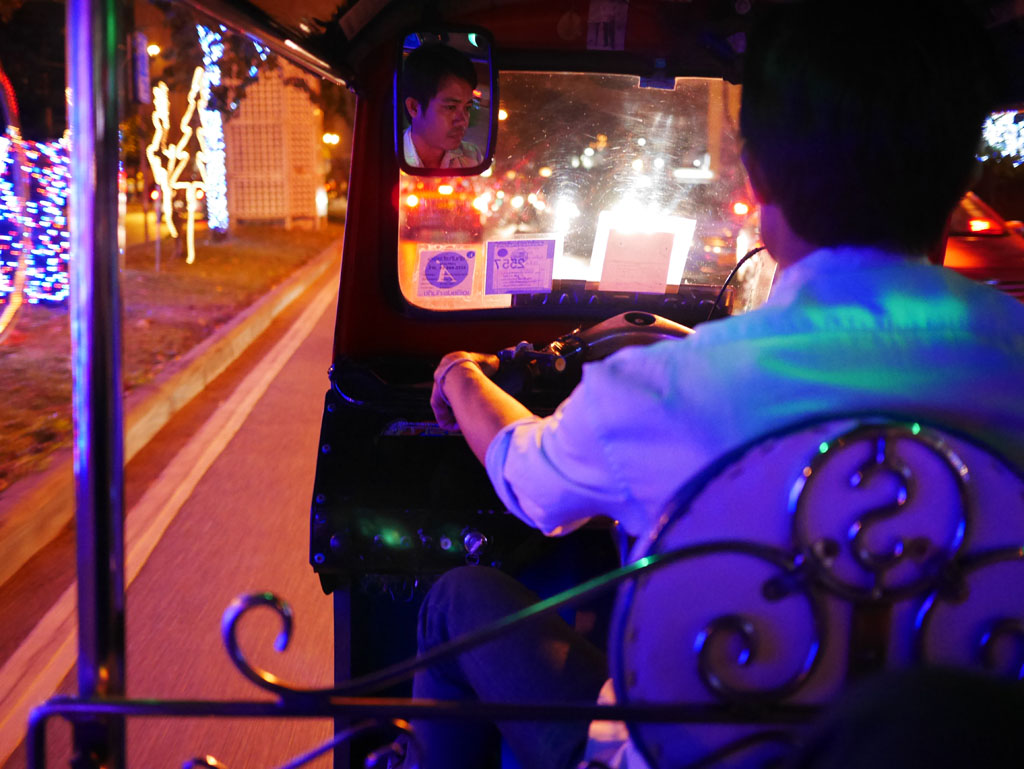 It’s a more intimate date with the city than sitting in a sterile air-conditioned taxi, less complicated than negotiating the BRT or the MRT, and usually faster, as you’re able to duck down alleyways and side streets too narrow for cars and even mount the pavement on occasion.

Tuk-tuks came into being during during WWII, when presumably someone, somewhere in Bangkok had the brilliant idea of adding an engine to his rickshaw, and the idea caught on.

These days however, if Tripadvisor is to be believed, unless you’re a local, you are likely to be fleeced by tuk-tuk drivers so it’s best to do some research and have an understanding of what the going rate should be. 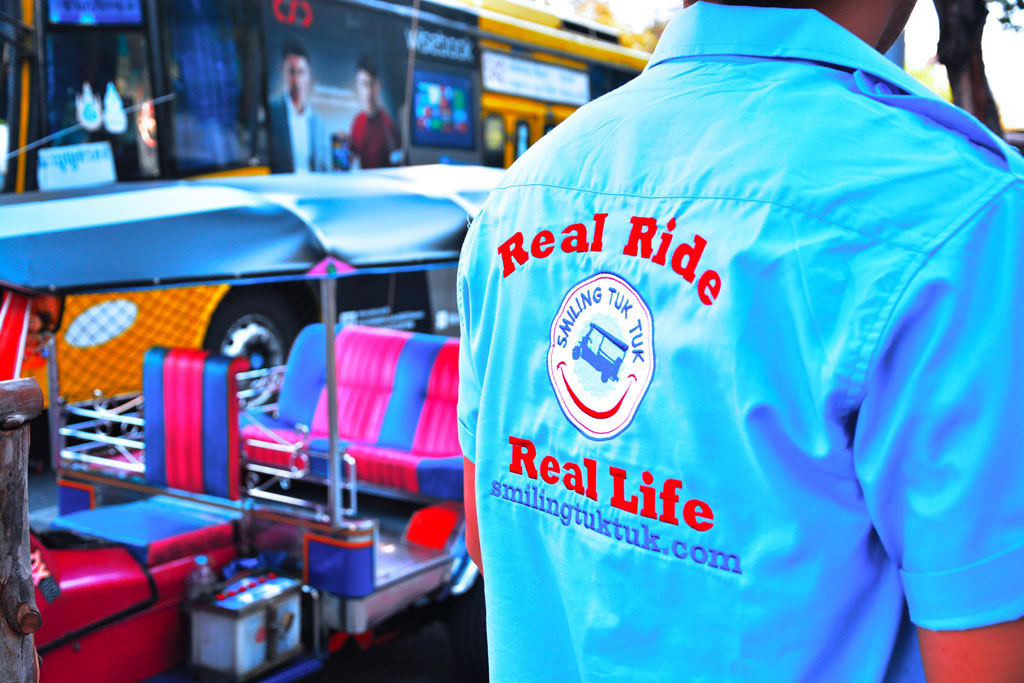 In Bangkok a short trip on a tuk tuk should cost around 30 Baht (one Aussie dollar), and it is definitely possible to hire one for the day or evening, but you’ll need to haggle. If you’re not a confident haggler, or you’re worried about the language barrier, ask someone at your hotel to help you negotiate or better still, book yourself onto an organized tuk-tuk tour of the city. 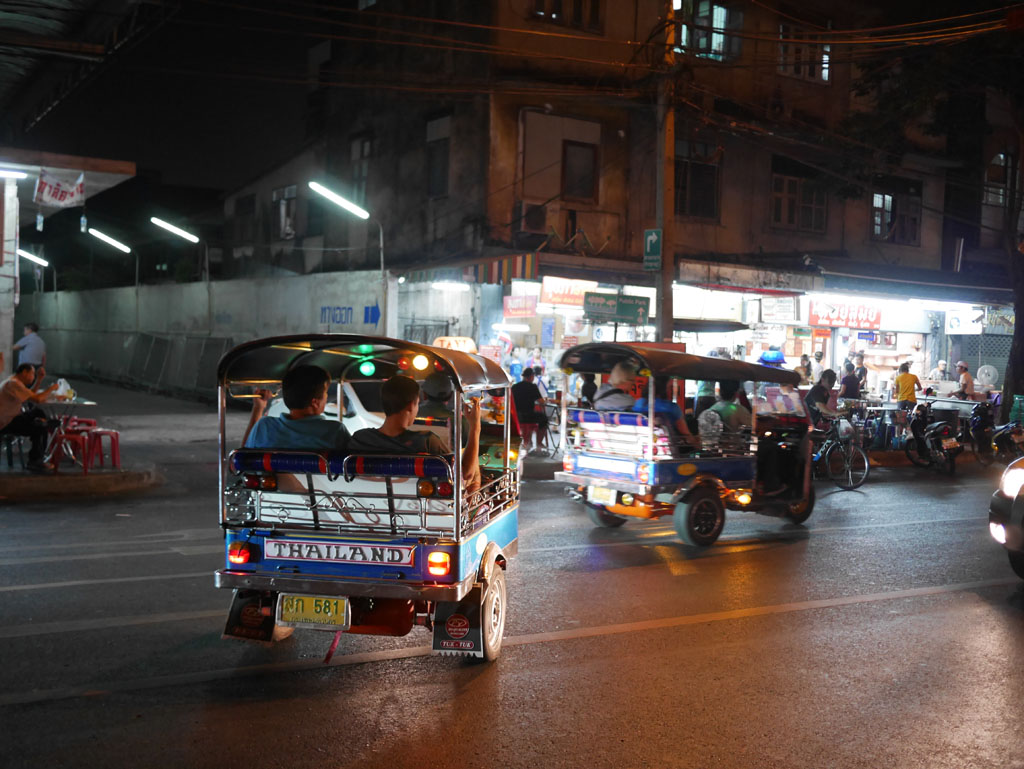 The tour gives us a taste of Bangkok at night, a mix of sight seeing and local food haunts. Our first stop is Go Ang Pratunam, widely agreed as the best place to get ‘Khao Mun Gai’, the Thai version of Chicken Rice. It’s an unassuming place, on busy Phetchaburi Road, not far from two of Bangkok’s largest shopping malls, Central World and Siam Paragon.

At about half past eight in the evening, the place is heaving and it’s fascinating to watch how quickly each dish is prepared and distributed to the packed tables that spread out from the small corner café to the edge of the wide pavement. 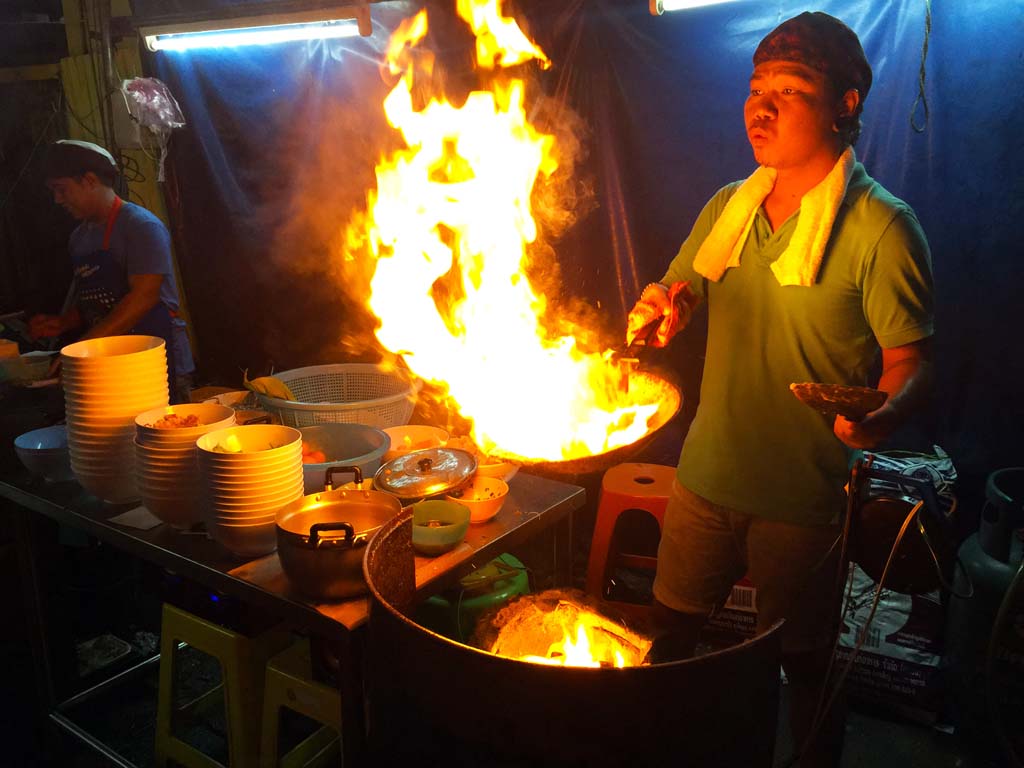 Our second course is across town through a labyrinth of streets that fly past so quickly I completely lose my sense of direction. This time we actually do mount the pavement as we head down an alleyway that’s barely wider than our tuk-tuk, as we reach our destination; Ann Guay Tiew Kua Gai.

Another hair-raising trip across town follows our noodle dish as we head towards the Chao Praya River to the Flower Market.

The evening is definitely the best time to wander through these markets. Without the daytime crowds, it’s a relaxing, fragrant stroll through the third largest flower market in the world. 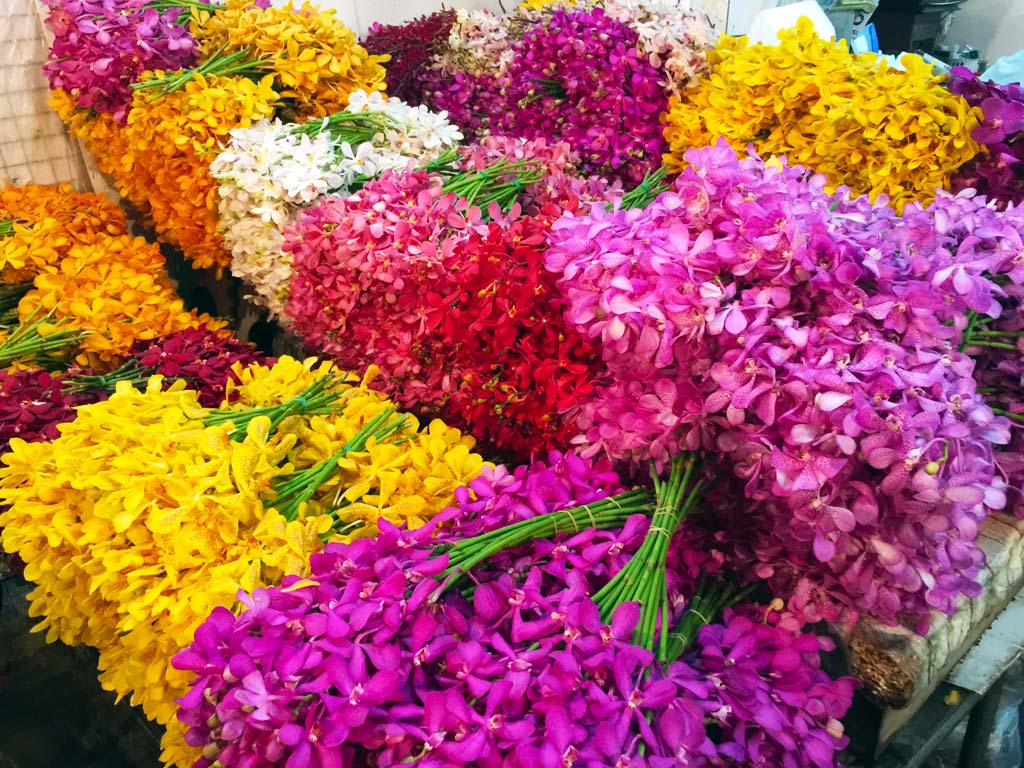 Just around the corner from here is our next stop, Wat Pho; the Temple of the Reclining Buddha, one of Bangkok’s most famous landmarks. By now it’s approaching 11pm and a stroll through the gardens of Wat Pho at this time of night is distinctly different to a visit during daylight hours. It’s peaceful, and feels more like it should do – like a visit to a religious monument rather than a crowded tourist attraction. 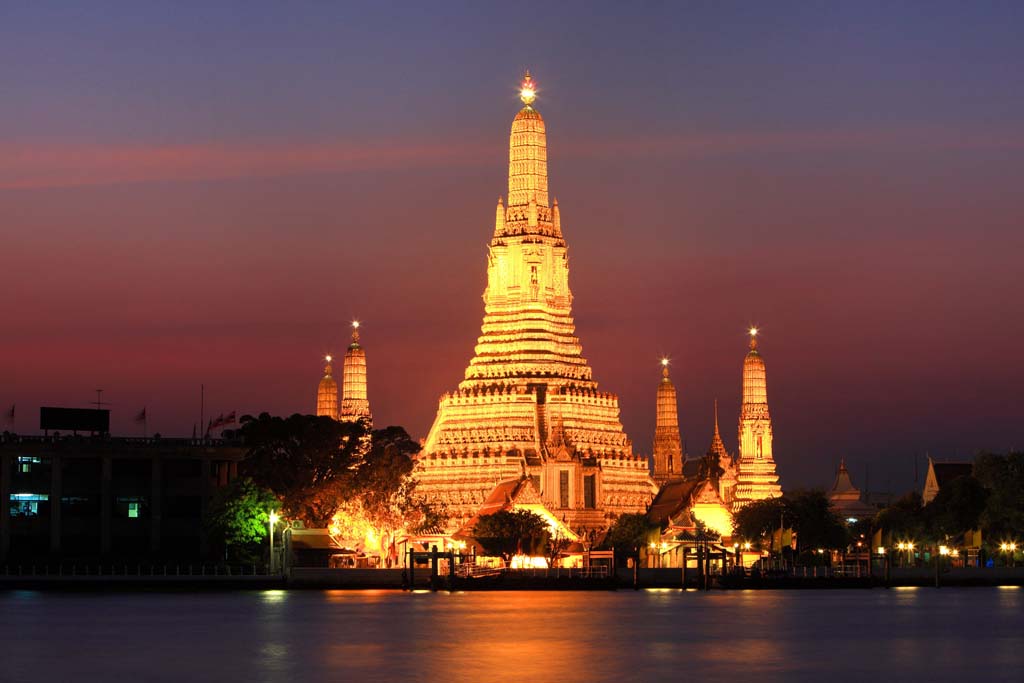 From here we take another short tuk-tuk ride to the river’s edge, and climb about 10 flights of stairs to a small roof top bar that has arguably the best view in Bangkok, and icy cold beer. Sala Arun is an old guesthouse located directly across the Chao Praya River from Wat Arun; The Temple of Dawn.

It’s now after midnight and the streets are almost empty of traffic, so the tuk-tuks pick up speed and race back across town to our last stop for the night, Thip Samai, for Pad Thai – apparently the best in Bangkok. It’s located on Maha Chai Road in Pranakorn.

Although it’s gone midnight, the restaurant is packed, with a long line of people waiting for a table. You don’t have to wait long though, the food comes out very quickly with an efficient production line turning out dozens of plates every few seconds, served either traditionally, or wrapped in a thin omelet. 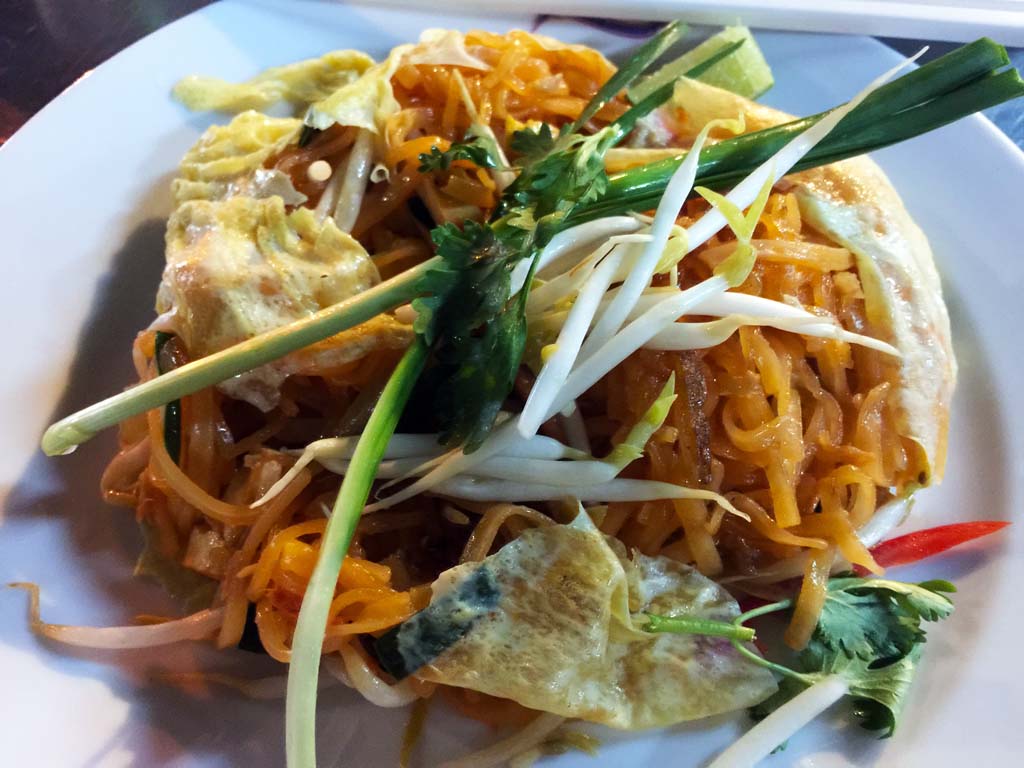 And as it’s our last stop, we can take our time over this midnight snack, amusing ourselves by trying to guess whether the glamorous women at the table next to us are in fact women. Ultimately their deep voices give them away.

As I sit here on the pavement eating Pad Thai from a plastic bowl I can’t help thinking; I feel like a local. Surely the sign of a good tour.

Bangkok Food Tours have a Best Eats Midnight Food Tour by Tuk-Tuk which starts at Chid Lom BTS Station and ends at your hotel. Groups are between 2 – 16 people and tours cost 1700 Baht per person including all food. Bangkokfoodtours.com

Take Me Tour use true locals for their tours, and have a night tuk-tuk tour that takes in China Town and the Flower Market for around 1300 baht per person. Takemetour.com

One thought on “Bangkok at Midnight.. by tuk tuk.”