You’ve probably never heard of Koh Laoliang. I hadn’t either, until a fellow traveller recommended it to me as an idyllic place to spend a few days camping in Thailand. It’s The Beach, he’d said, minus the hand-drawn map, the suicidal Scot, the despotic Tilda Swinton and, as I would soon discover, the hordes of sun-seeking day-trippers who daily descend on Koh Phi Phi (in neighbouring Krabi province), where the movie was shot.

Laoliang is that rare thing in Thailand: a remote island national park with a gorgeous beach that isn’t overrun with longtail boats or people – only 40 can stay at a time, in tents, no day-trippers allowed. There are no bungalows or resorts either. 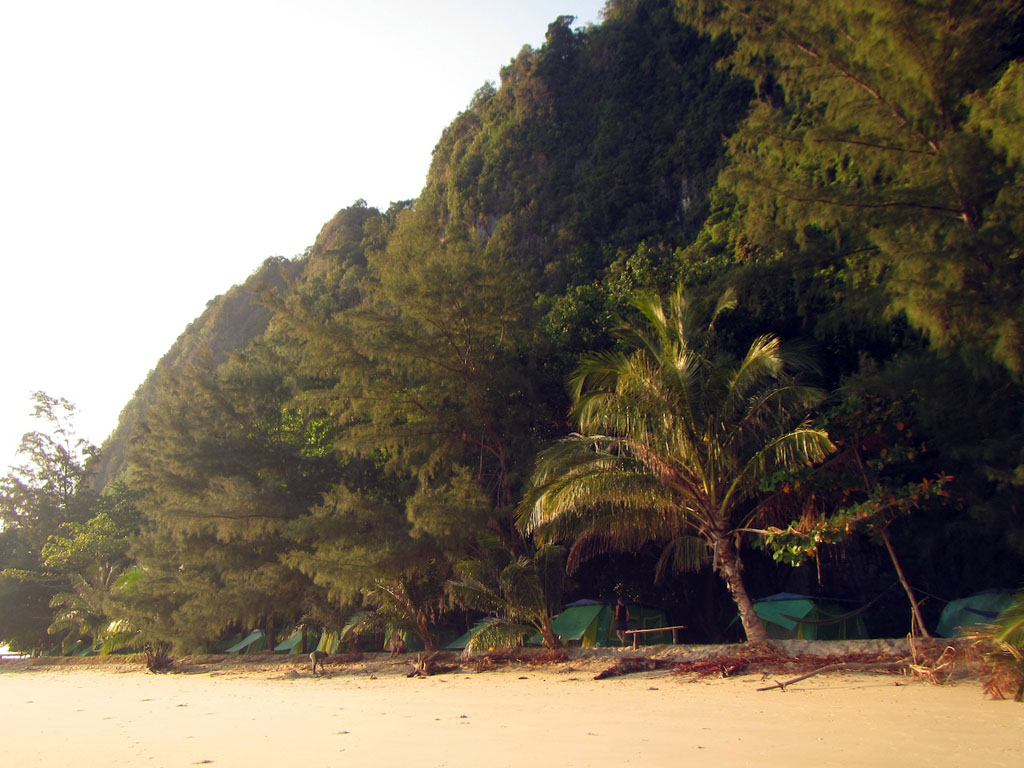 The island, which is in Trang province, is open for only five months of the year, November-April. Even then, just getting there is an adventure, particularly if you’re coming from Krabi, as I was.

It started with a longtail boat ride from Railay to Krabi town, where an American guy, Richard (hmm, same name as Leo DiCaprio’s character in The Beach…), picked me up on his motorbike and took me to Krabi bus station (it was decent of him to let me use his only helmet), where I boarded a double-decker public bus for a two-hour road trip to Trang.

In Trang, I met Pon, a ponytailed metal-head (we listened to Metallica-like tunes in his ute), who drove me and two Swiss climbers (who’d just arrived on the train from Bangkok) to Hat Samran pier. From there, we stepped onto a longtail that pointed its raised bow towards the open ocean and our destination: twin karst islands rising out of the Andaman Sea 20 kilometres away. 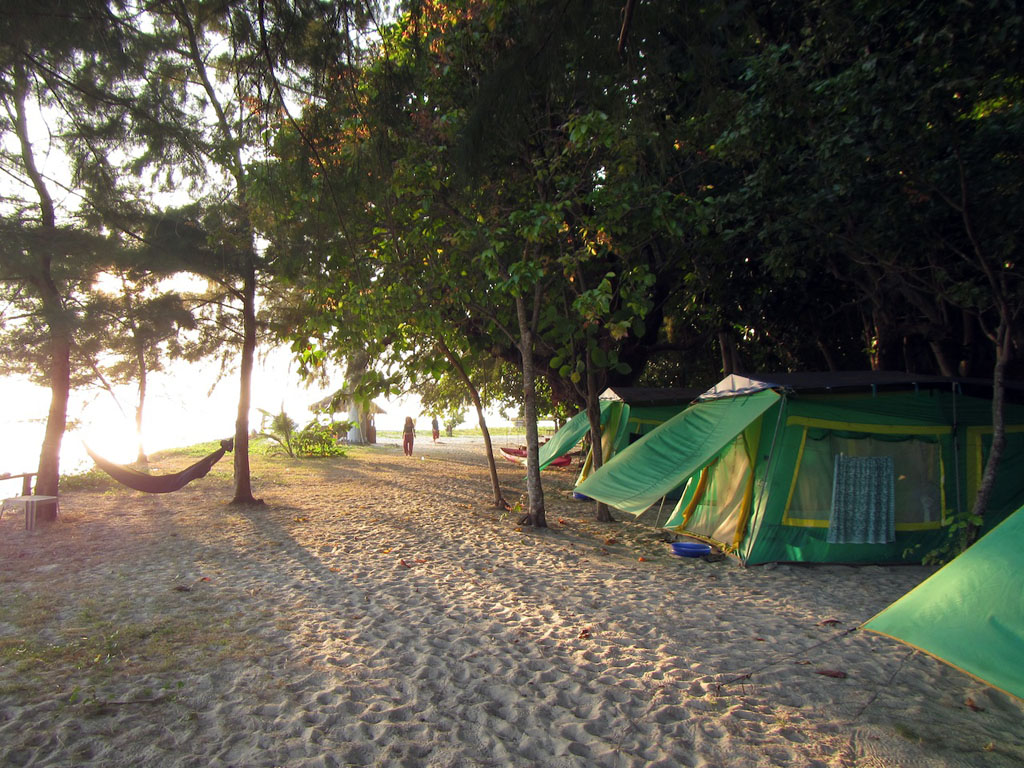 An hour after leaving the coast – having seen flying fish and diving seabirds on the way – our longtail nosed ashore at North Laoliang Island (the larger South Laoliang Island across the channel has no accommodation but Laoliang guests can kayak over to it for the day).

I could hardly believe my eyes: clear, turquoise water, a dazzling white beach book-ended by high limestone walls, eagles soaring overhead, a thatched open-air dining “room” and a row of green and yellow tents right on the sand. This is “sea camping” and it’s sublimely simple. 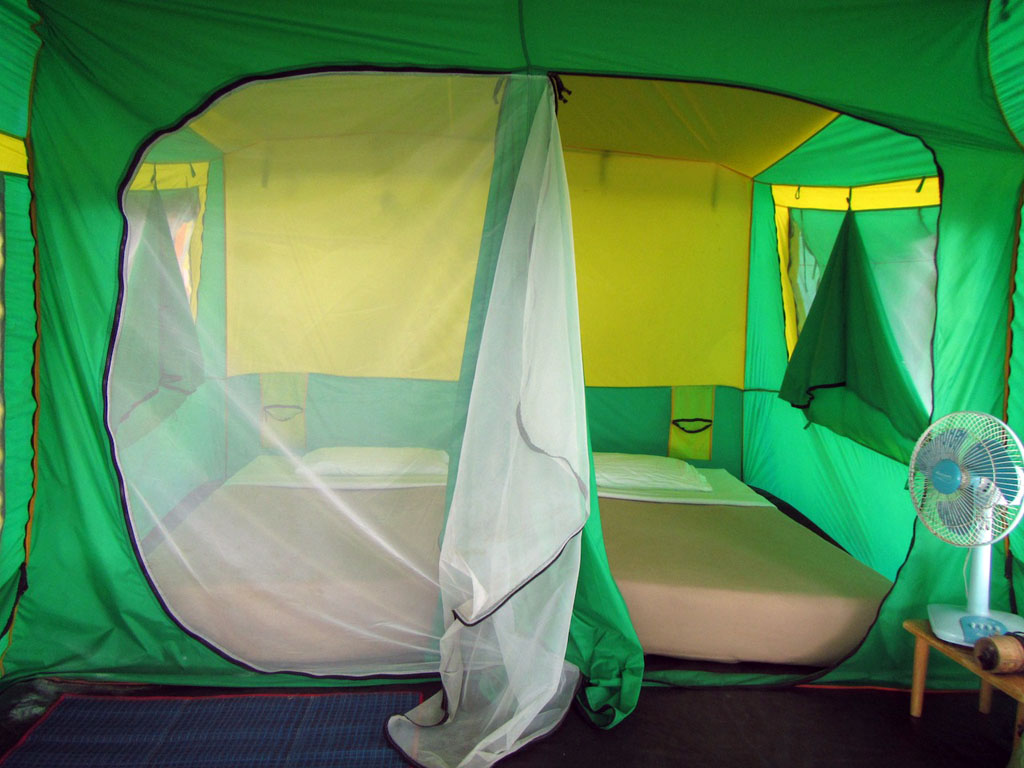 The tents all face the sea and were more spacious and comfortable than I’d expected. Each has two rooms: a bedroom with two single bed mattresses on the floor, made up with sheets and blankets, and a roomy vestibule with a fan and a light (the island’s generator comes on at 4pm every day).

Two kinds of people come to Laoliang: non-climbers (mostly couples and families with young, free-range children) and climbers (who generally bring their own gear, though guests can rent harnesses, shoes and ropes on the island). The climbing here is legendary, with bolted sport climbs of varying levels starting right on the beach and from rope ladders that dangle into the water; there are even multi-pitch climbs up 100-metre-high walls. 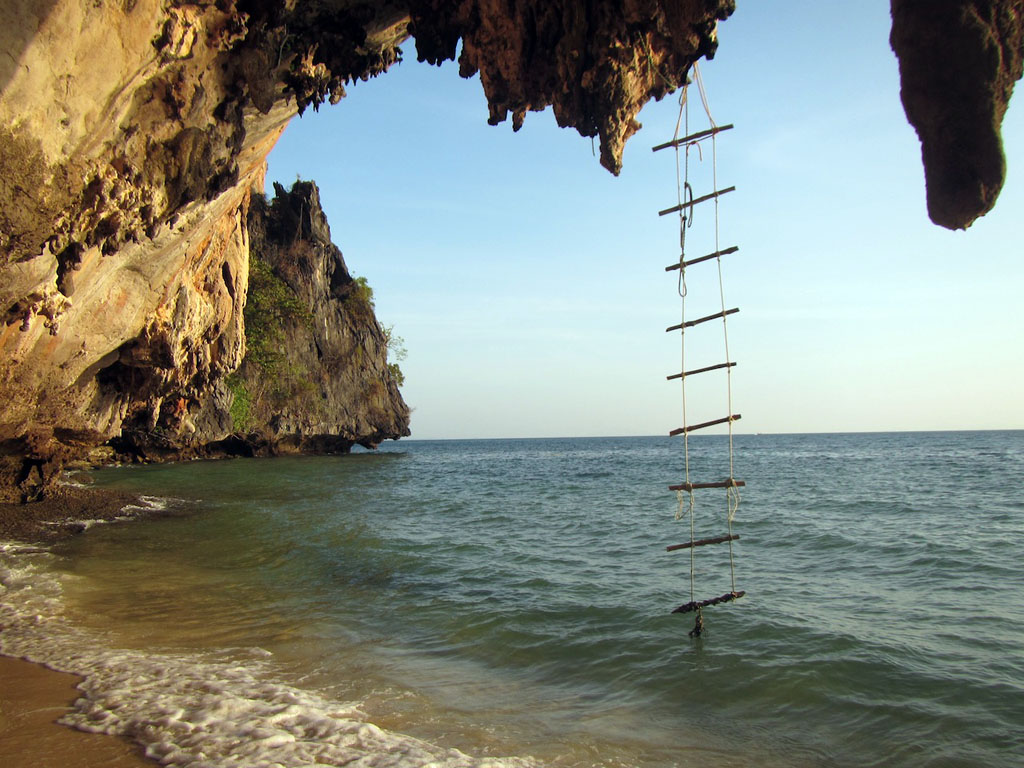 But the best thing about Laoliang is its peacefulness. There are no longtails speeding past day and night. There’s no wifi or mobile reception. You can walk everywhere barefoot. The sun is your alarm clock, rising at a civilised hour: just before 7am when I was there. There’s a small bar with a bamboo platform and cushions, which plays music at night, but never loud enough to disturb anyone in the tents.

It’s the kind of place where people do yoga on the beach in the mornings and swim before breakfast. After breakfast, you can go snorkelling (there’s a small reef you can swim to from the beach), rent a kayak, try deep-water soloing (climbing low sea cliffs without ropes and falling safely into deep water) or just lie in a hammock with a book. Afternoons are for climbing, if you’re so inclined; that’s when the east-facing walls are in the shade (it’s too hot to climb in the morning sun). After dinner, there’s a nightly star-show overhead. 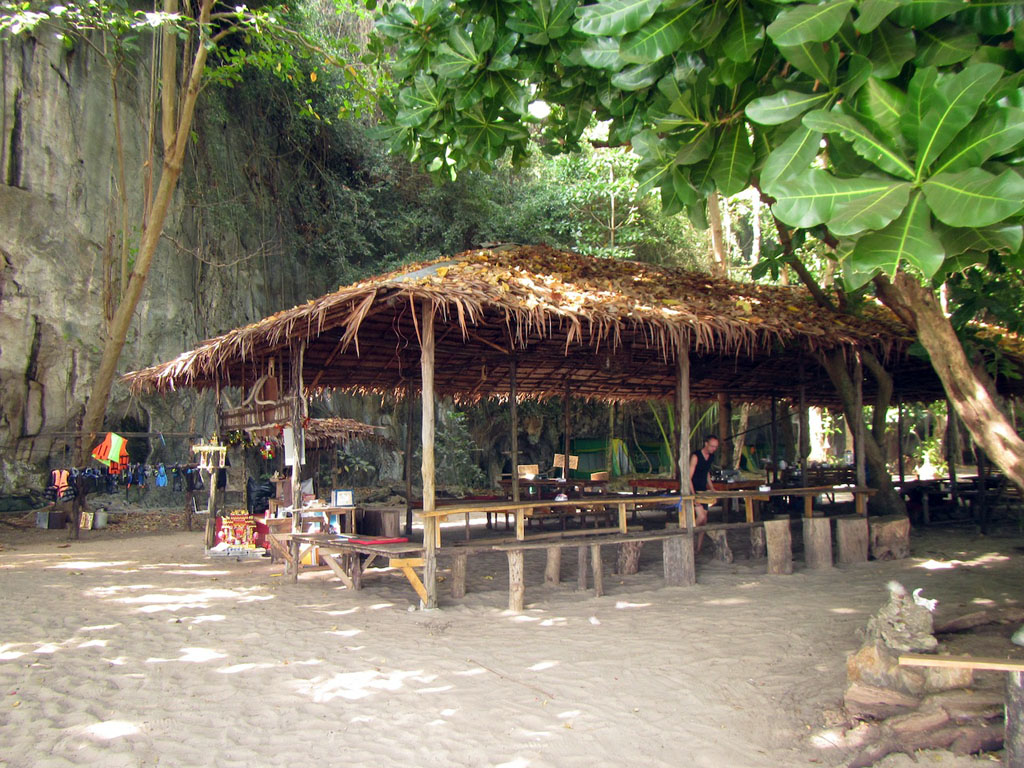 Laoliang isn’t for everyone. It’s a little pricey, for a tent, in Thailand (1700 baht per person per night, although that does include all meals). You’ll be sleeping on the floor (albeit on a comfortable mattress), using a communal bathroom (there’s one for men, one for women) and having cold showers, and the food is basic (which is surprising given that a daily longtail from the mainland brings new guests and supplies and, well, this is Thailand.)

But if you love places where nature, not what’s on the menu, is the main event, you’ll love Laoliang. Sure, there’s a diesel generator, and drinking water and all supplies must be transported from the mainland, but in a country where “eco” is almost a dirty (or at least misunderstood) word, Laoliang is a shining beacon of hope. May it stay just as it is, undeveloped and un-fancy, for a long time to come.

Getting there: Laoliang Island is 20 kilometres off the coast of Trang province (south of Krabi province) in Koh Petra Marine Park and is open only during the dry season, from November 1 to April 30. You can fly to Trang from Bangkok. Tents cost 1700 baht per person per night, including all meals; 3-day packages cost 6500 baht, including transfers from Trang, meals and activities such as snorkelling and an introduction to rock climbing. See www.laoliangisland.com 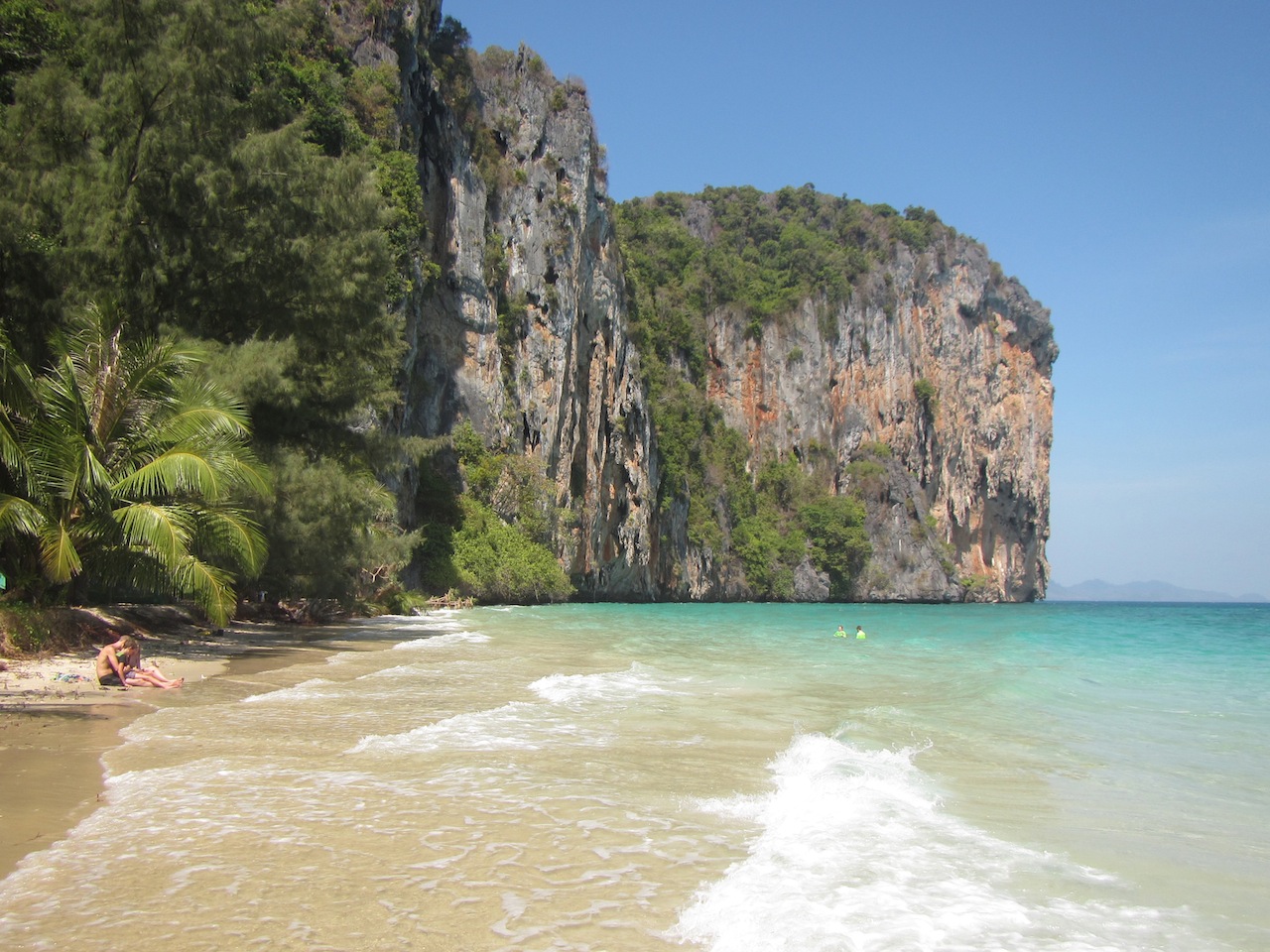 One thought on “Camping in Koh Laoliang, a hidden gem in Trang”