Northern Thailand’s Chiang Rai is well-known as a centre for the arts, with several incredible cultural attractions and colourful characters from Thailand’s art world. The White Temple is one of these attractions, a place that really earns the description: unique. 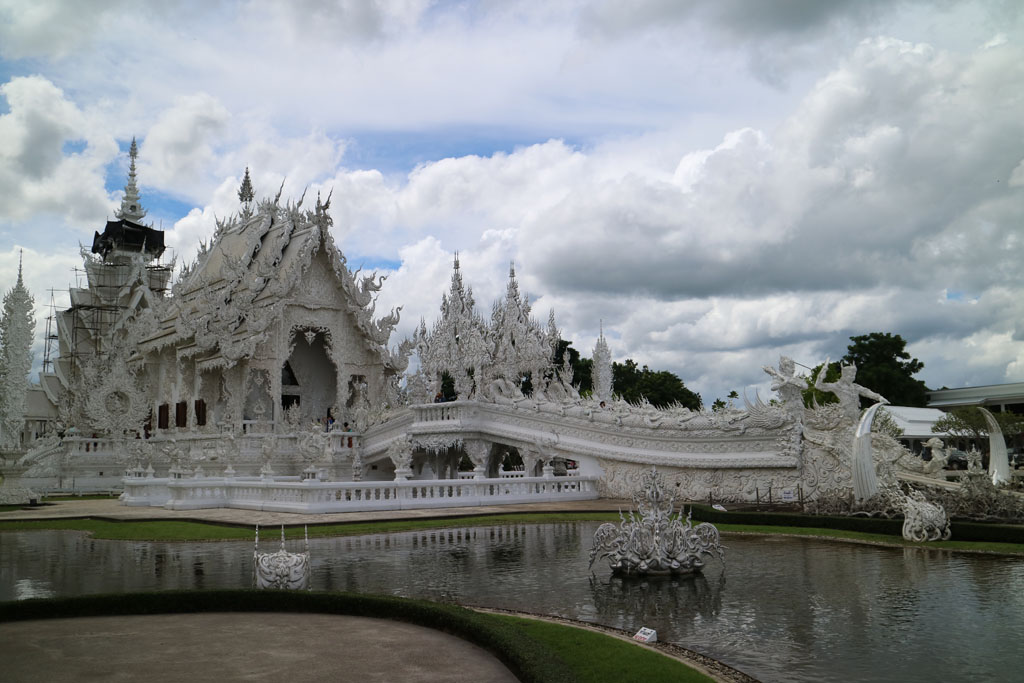 While it looks like a traditional Thai temple, Wat Rong Khun, or the White Temple as it is known to foreigners, is anything but. The creation of millionaire Thai artist Ajarn Chalermchai Kositpipat, it’s both an homage to traditional Thai artistry and popular culture. 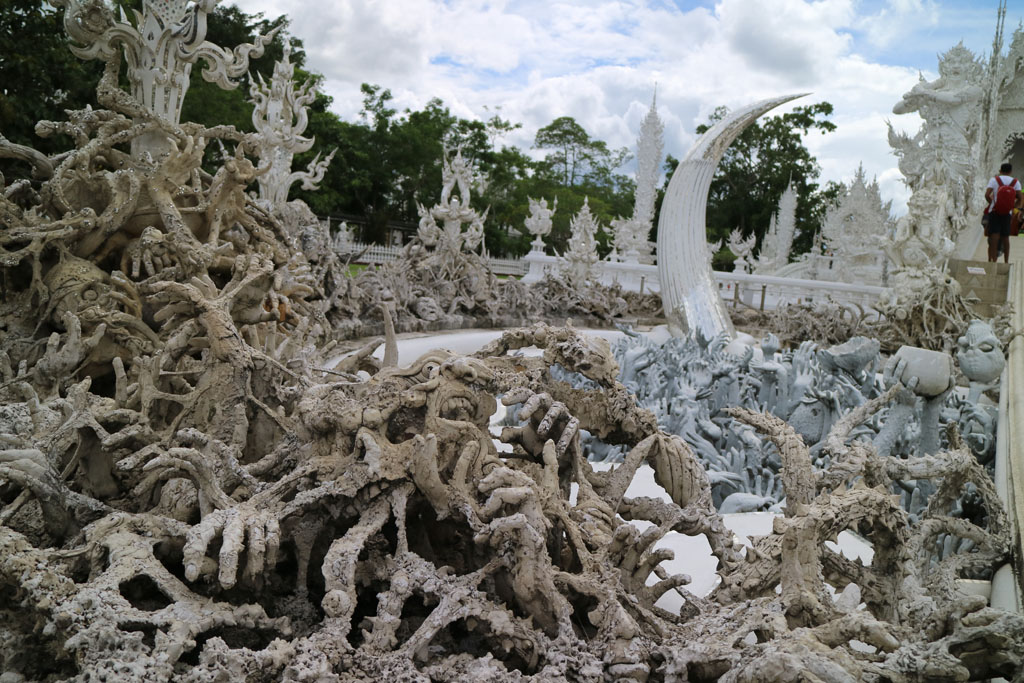 As you approach the White Temple itself, past a pool of reflection surrounded by ornate sculptures and incredibly decorative walls and turrets, a forest of disembodied arms reach up to you as you pass over a bridge to the entrance. 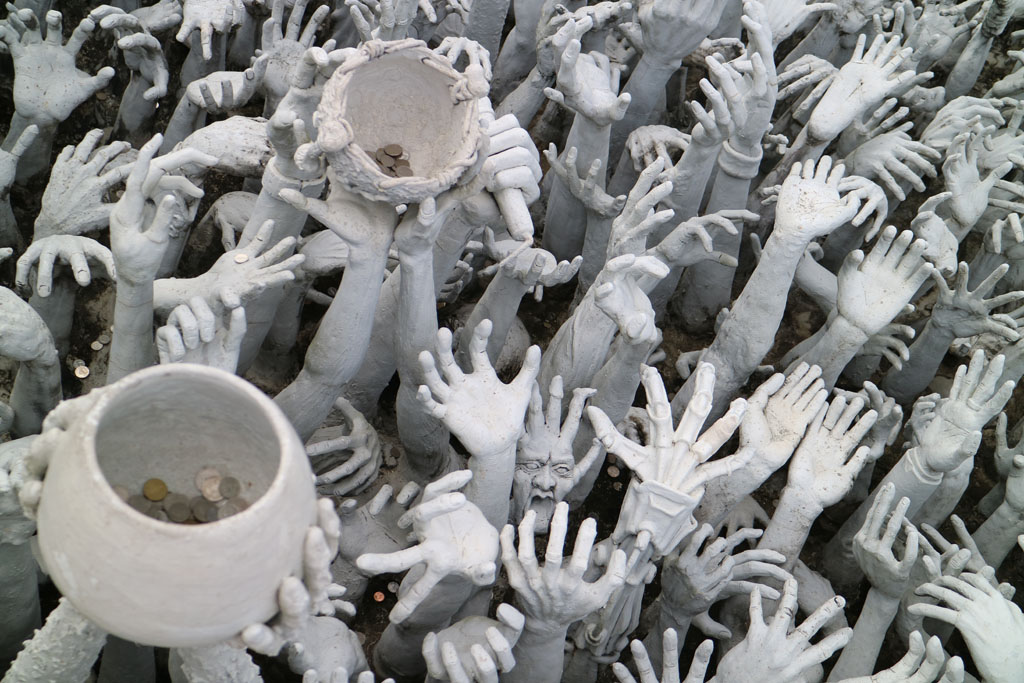 Surrounding the temple grounds, the heads of demons hang from trees – traditional Thai demons alongside the Incredible Hulk, Terminator, even Gollum. 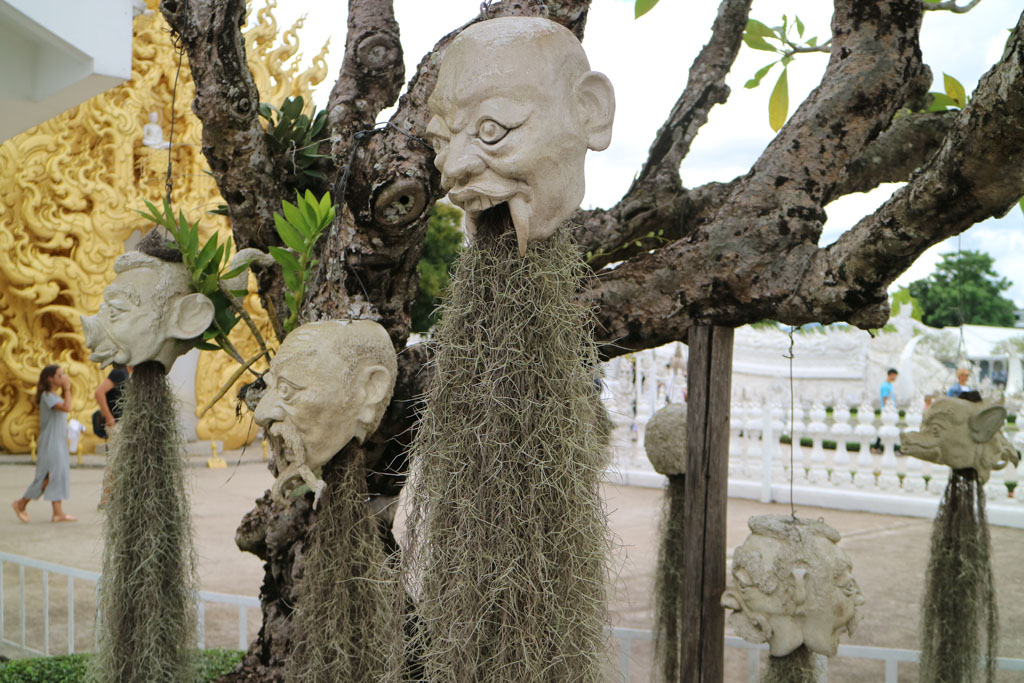 Ancient Buddhist legends, the struggle between Lord Buddha and the Mara (demon) are told in traditional style, a mural on the walls of the temple interior, but the characters depicted are 20th century heroes and villains, like Spiderman, Ultraman and Neo, facing off Darth Vader and the Terminator. 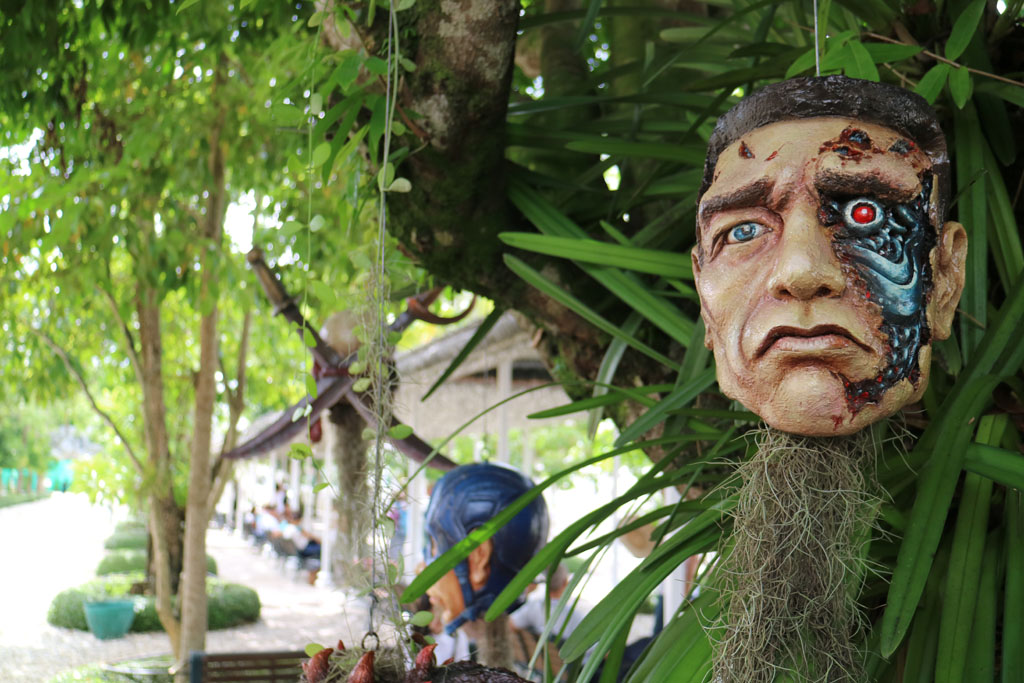 There’s a message here to the world, that we have lost a moral compass to guide us, in Chalermchai’s words; “look at each other with kindness, not with hate that can lead to war”. The eyes of a huge demon each have portraits of George Bush and Osama Bin Laden inside them, looking to each other, as below them, the Twin Towers burn. The artist’s message by including these characters is that in reality, while we need real-life heroes – no movie screen heroes could save the Twin Towers. 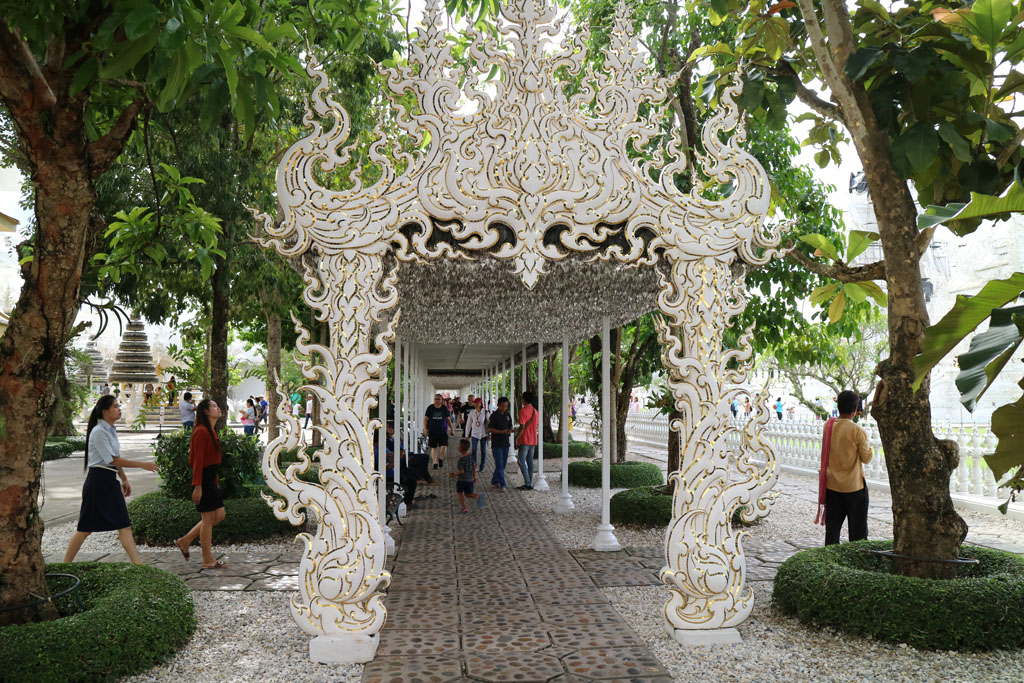 As you move through the temple, a path of enlightenment takes you towards a statue of the Lord Buddha with artwork transforming from demons to angels as you pass through, out the other end to a heavenly garden’, down a passage decorated with silver leaves and beyond to another golden temple surrounded by a pool. 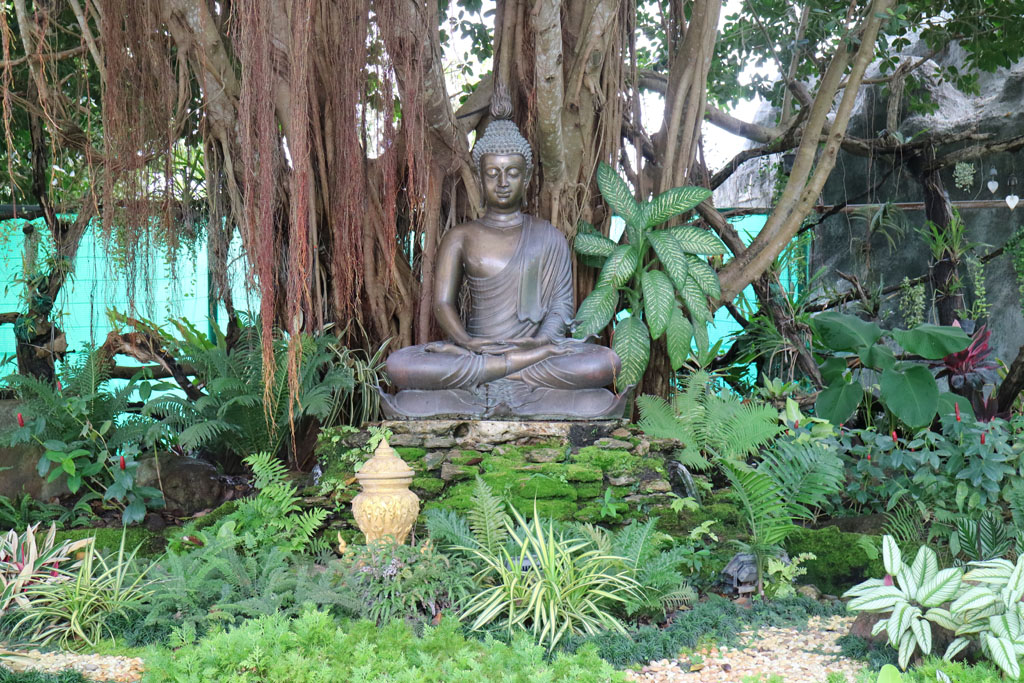 The White Temple, and its surrounding garden and buildings, is an ongoing project, worked on by Chalermchai and some 300 apprentices. 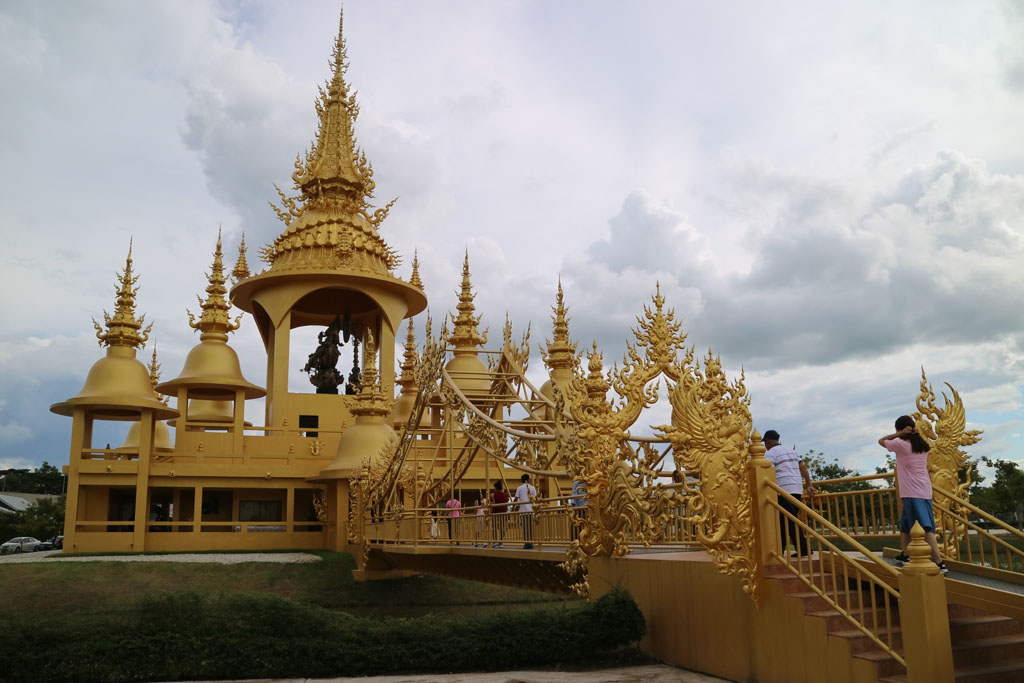 In a studio the size of a hanger, we were able to observe the artists at work on their latest project, a giant mural and statue commemorating the heroes of the nearby rescue of schoolboy soccer team, the ‘Wild Boars’ from their ordeal in the flooded Tham Luang cave. 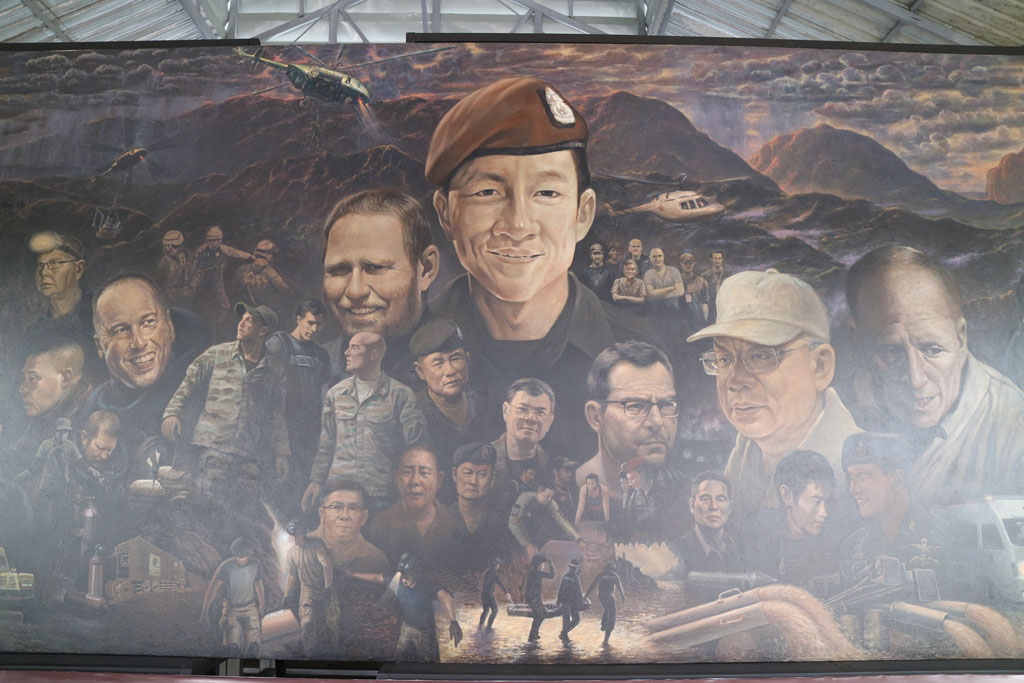 The centrepiece of this memorial artwork, which will eventually be located near the entrance to Tham Luang cave, is a larger than life statue of the former Thai Navy Seal, Saman Kunan. 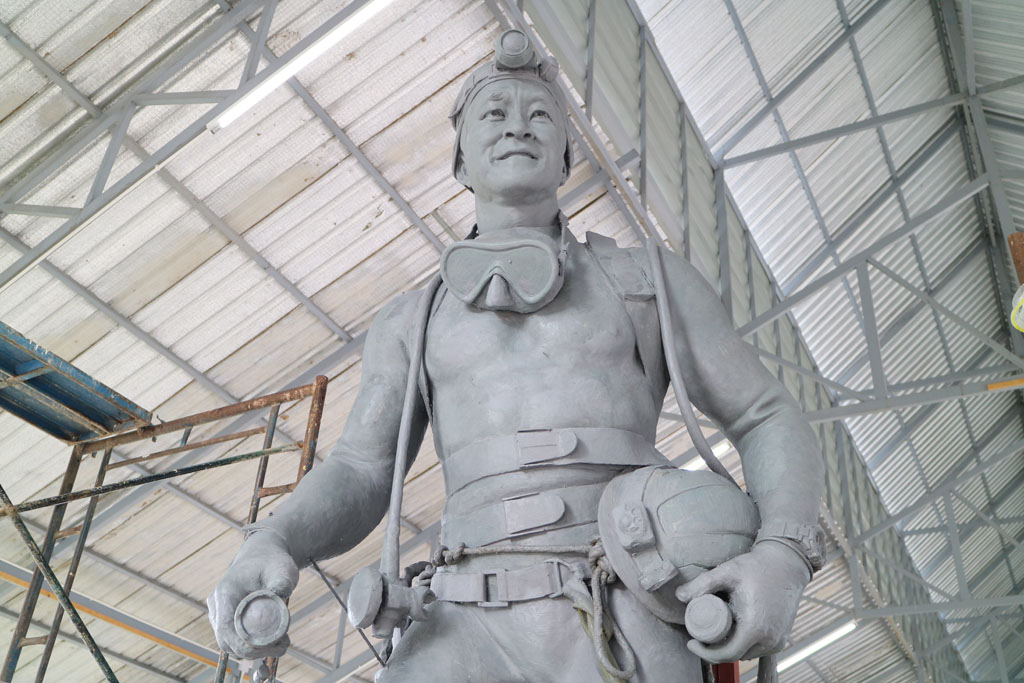 Back towards the entrance of this enormous compound, there is an art gallery which houses a great collection of the artist’s more traditional pieces, painted in traditional Thai style, illustrations depicting Buddhist legends, as well as pieces of memorabilia from Chalermchai’s private collection, old vinyl LPs, comics and various other toys and kitsch oddities. 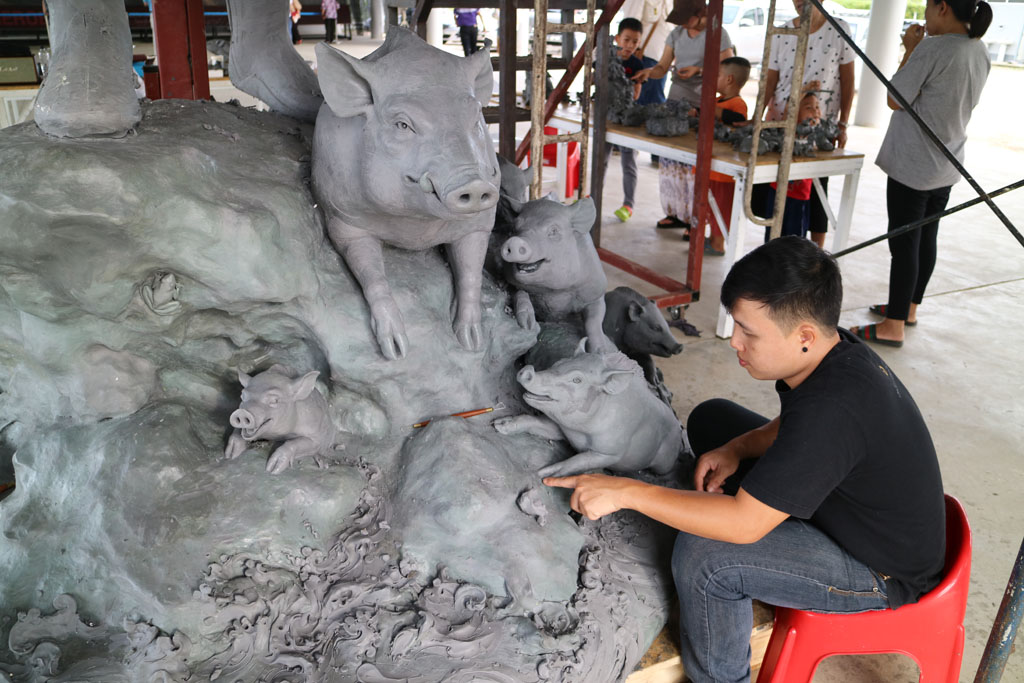 The complex is something you won’t find anywhere else. With each turn you take you stumble across another beautiful construction or oddity of sorts, like this toilet block fit for a king, for example, more like a palace than a bathroom. 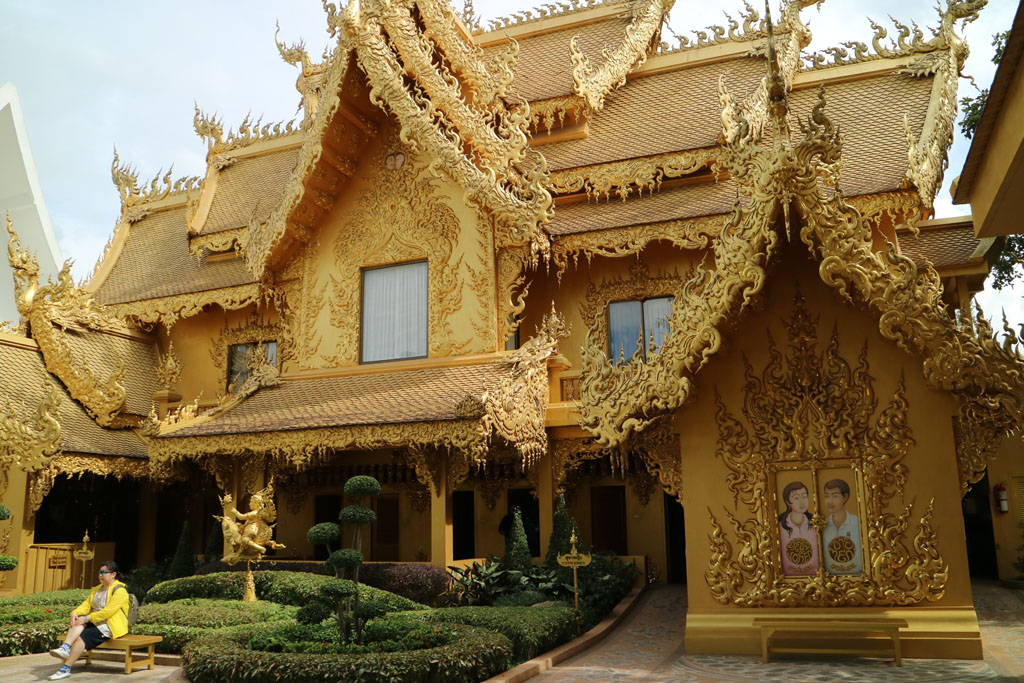