“This is not cliff-jumping. We know the difference. We are climbers.” So says a sign outside a climbing school advertising “deep-water solo” trips in Tonsai, one of two beaches on Krabi’s Railay peninsula, the one where serious climbers hang out. I’m staying at the other, more touristy beach, Railay, where the distinction between cliff-jumping and deep-water soloing leaps right over my head – and inspires me to do a deep-water soloing day trip myself.

What is deep-water soloing? 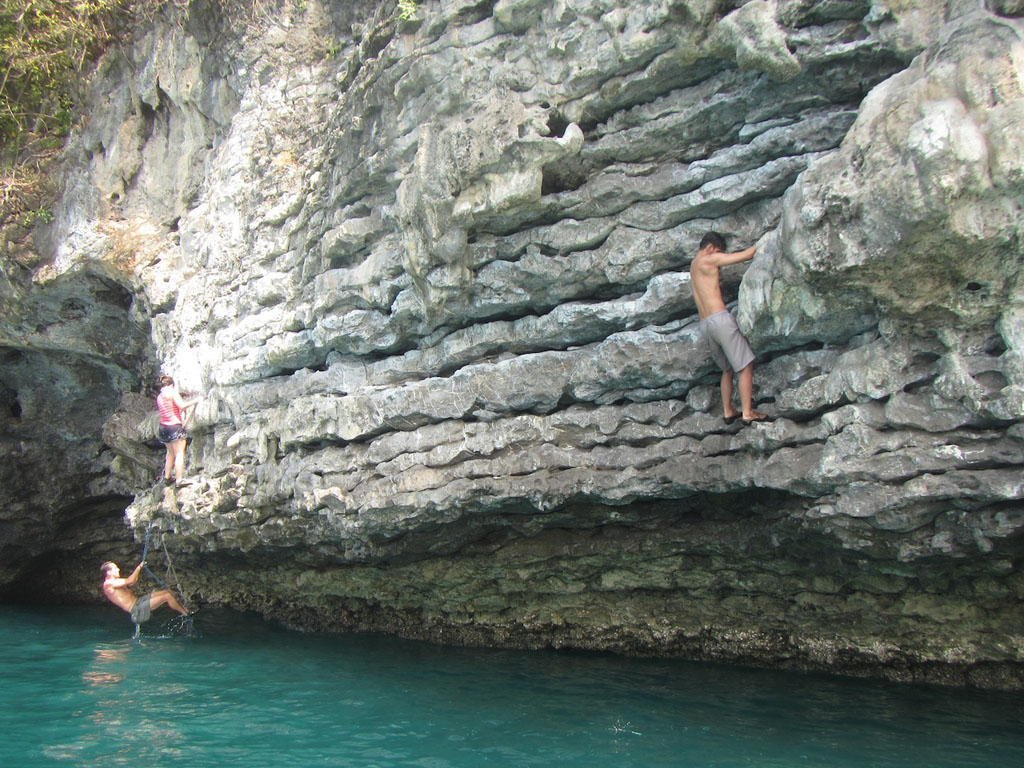 DWS, as it’s also called, has been growing in popularity all over the world since the mid-1990s, so it was only a matter of time before Krabi started doing deep-water solo day trips for visiting climbers – and, increasingly, anyone. That’s one of the beauties of it: no climbing experience is necessary.

I’d just finished a 3-day climbing course in Railay and had a few extra days up my sleeve, so the chance to combine my new love of climbing and my first love, being in the sea, was too good to pass up, particularly when I found out you could do it from a sailing boat instead of a noisy longtail. 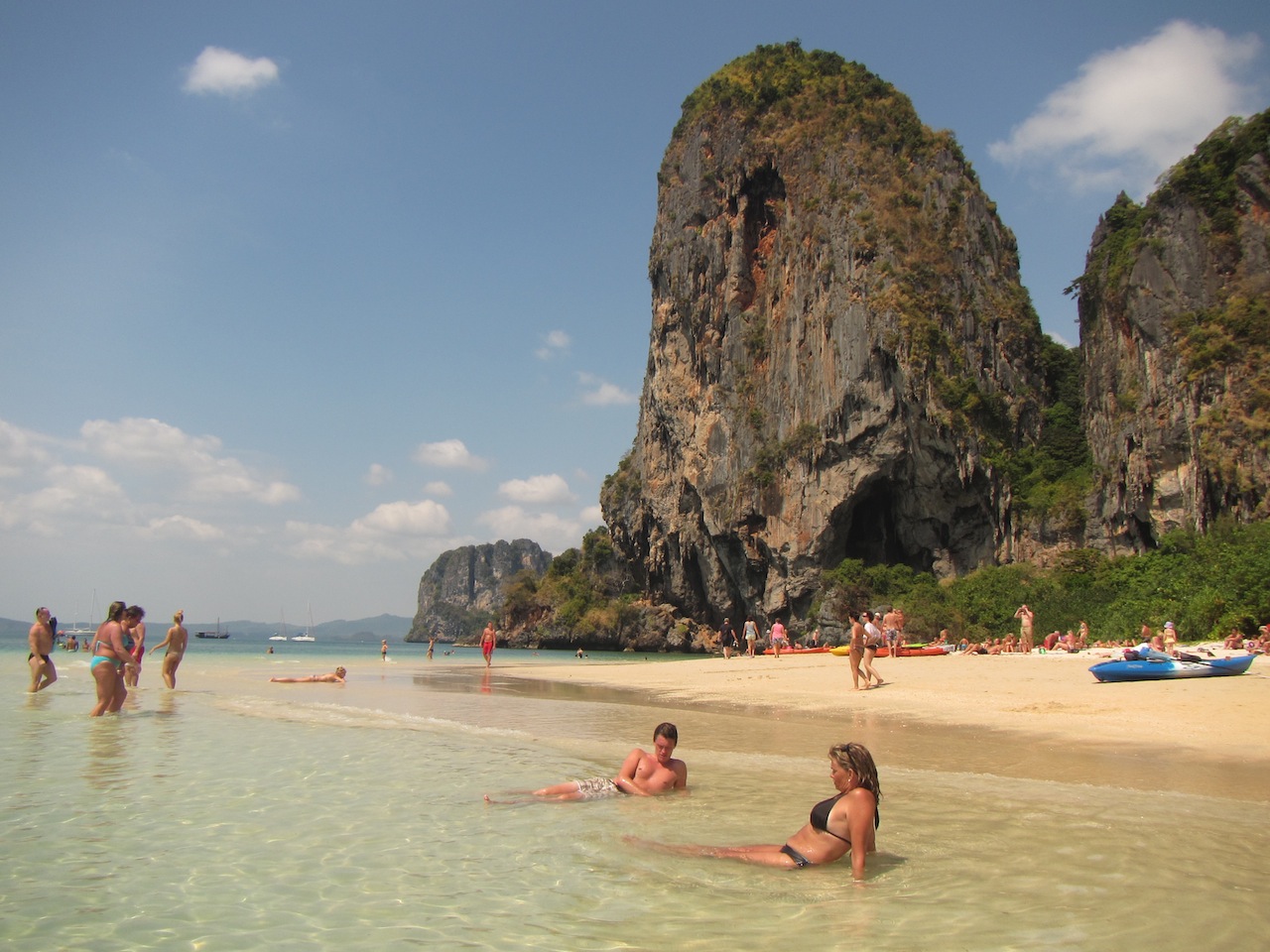 Trips leave Railay beach around high tide, to maximise water depth; it’s 10am when eight of us, all deep-water solo virgins, meet on Railay West beach and climb into a longtail that will take us to a beautiful 32-foot yacht, lying at anchor just offshore.

Before we know it, our skipper, Pet, has given the order to his two crew to hoist the sails and we’re gliding across a glittering sea between Krabi’s karst islands towards our destination, Koh Poda. This is worth the trip cost alone, and everyone is in high spirits, lounging on the deck under the sails and the tropical sun.

An hour later, we’re there: anchoring beside a high limestone wall that rises straight up out of the sea. 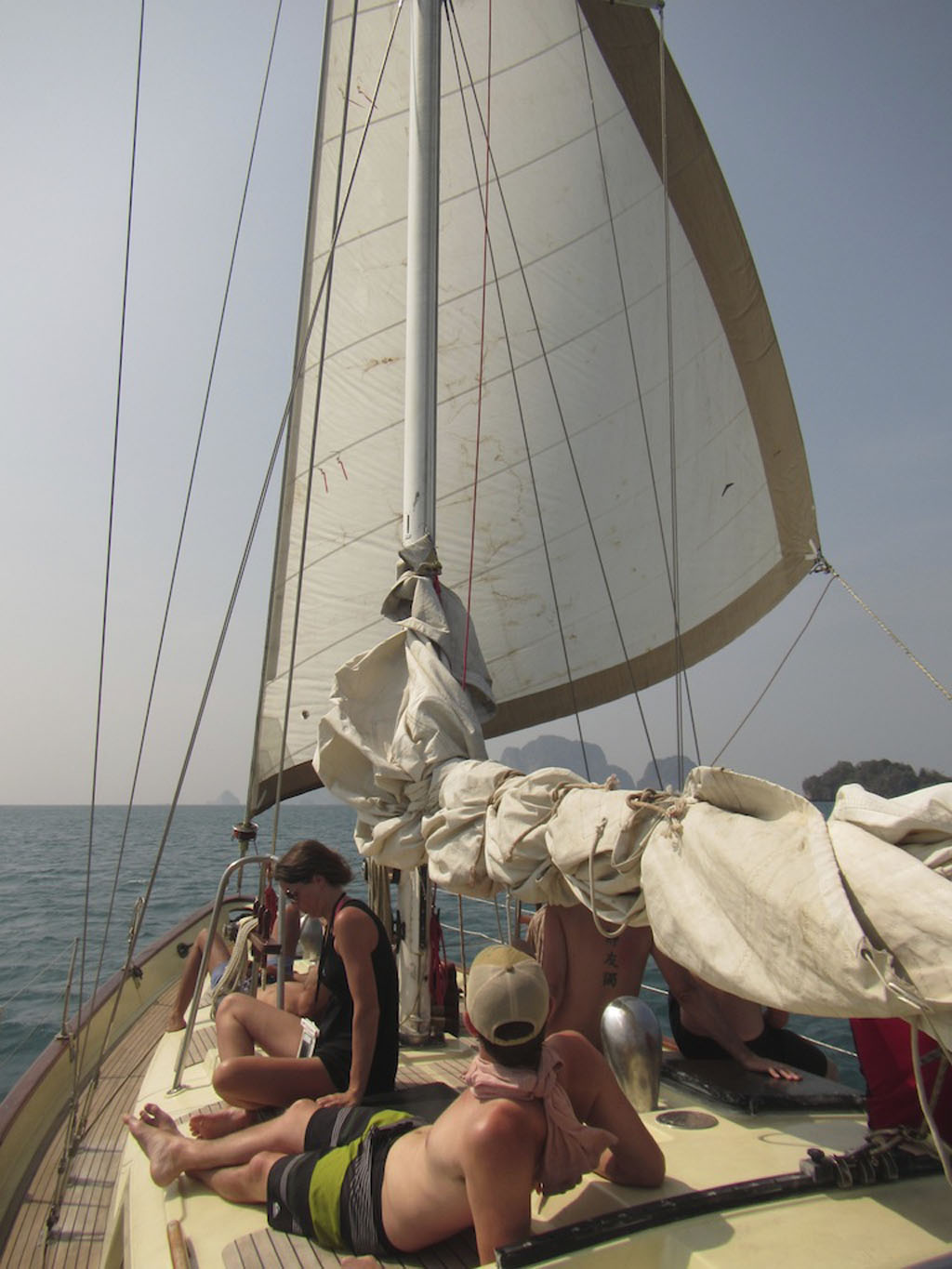 “Yeah!” we say, though there are ripples of nervous anticipation.

It feels strange stripping down to a bikini (boardshorts for the boys), slipping on a pair of climbing shoes (which are provided) and stepping into an inflatable zodiac, which takes us over to the nearest wall. There we climb up a 2-metre rope ladder that spans the undercut gap between rock and sea (this is the most strenuous part of deep-water soloing, hauling yourself up bamboo rungs as the ladder writhes in the waves made by passing longtails). 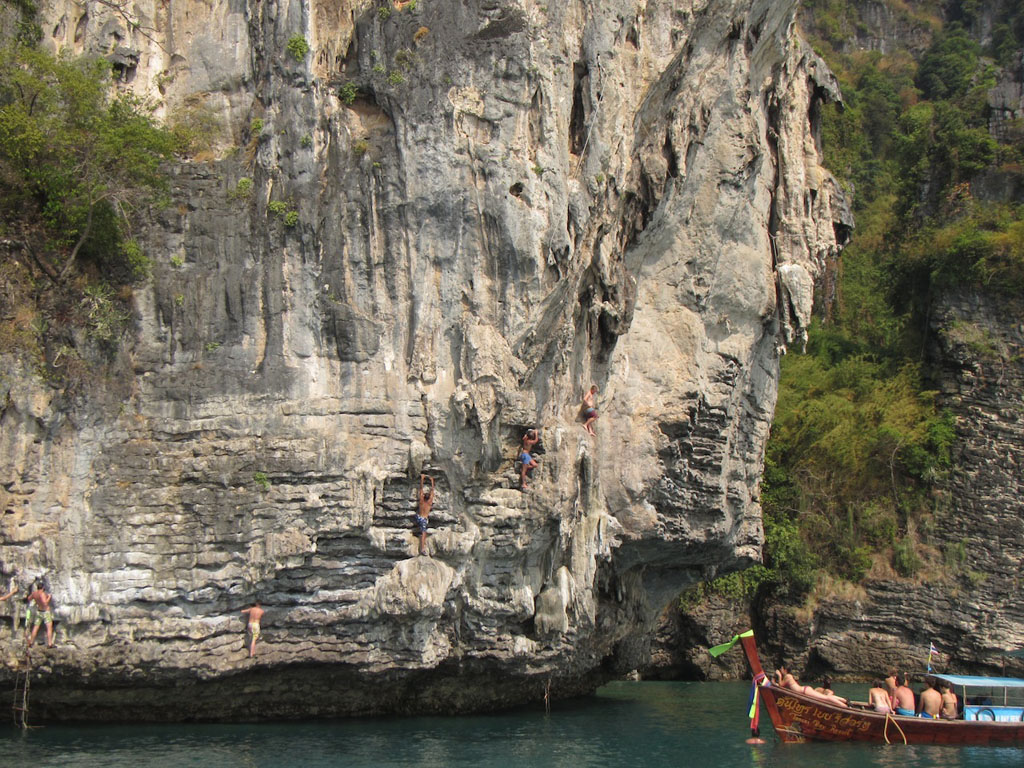 Climbing without a harness or rope really is liberating. There’s no chalk either (it would turn into a claggy paste on contact with water), but hanging on to the rock with wet hands isn’t hard, mainly because the rock is sharp and these are easy climbs, with big holds and ledges to stand on.

Side by side, we explore the wall, staying low or climbing as high as we dare, shouting when we’re about to jump/fall, to make sure there’s no one in the water below. The higher you go, of course, the harder the water gets. Up to 10 metres is considered fairly safe; any higher and the sea can feel like concrete. The secret to avoiding injury, Pet had told us, is to fall with your arms by your sides and your feet together. Good to know.

The climbing is fun, until I remember my aversion to – and fear of – jumping from high places. So after my last jump/fall, from a personal-best height of five metres, I retire to the bench – the deck of the yacht. It turns out that deep-water soloing is the best kind of spectator sport. The participants are in plain sight, like butterflies pinned to a corkboard. You’re close to the action (so close you’ll often get splashed when climbers fall into the water). And because you’ve tried it yourself, you know how brave they are for climbing higher than you dare. 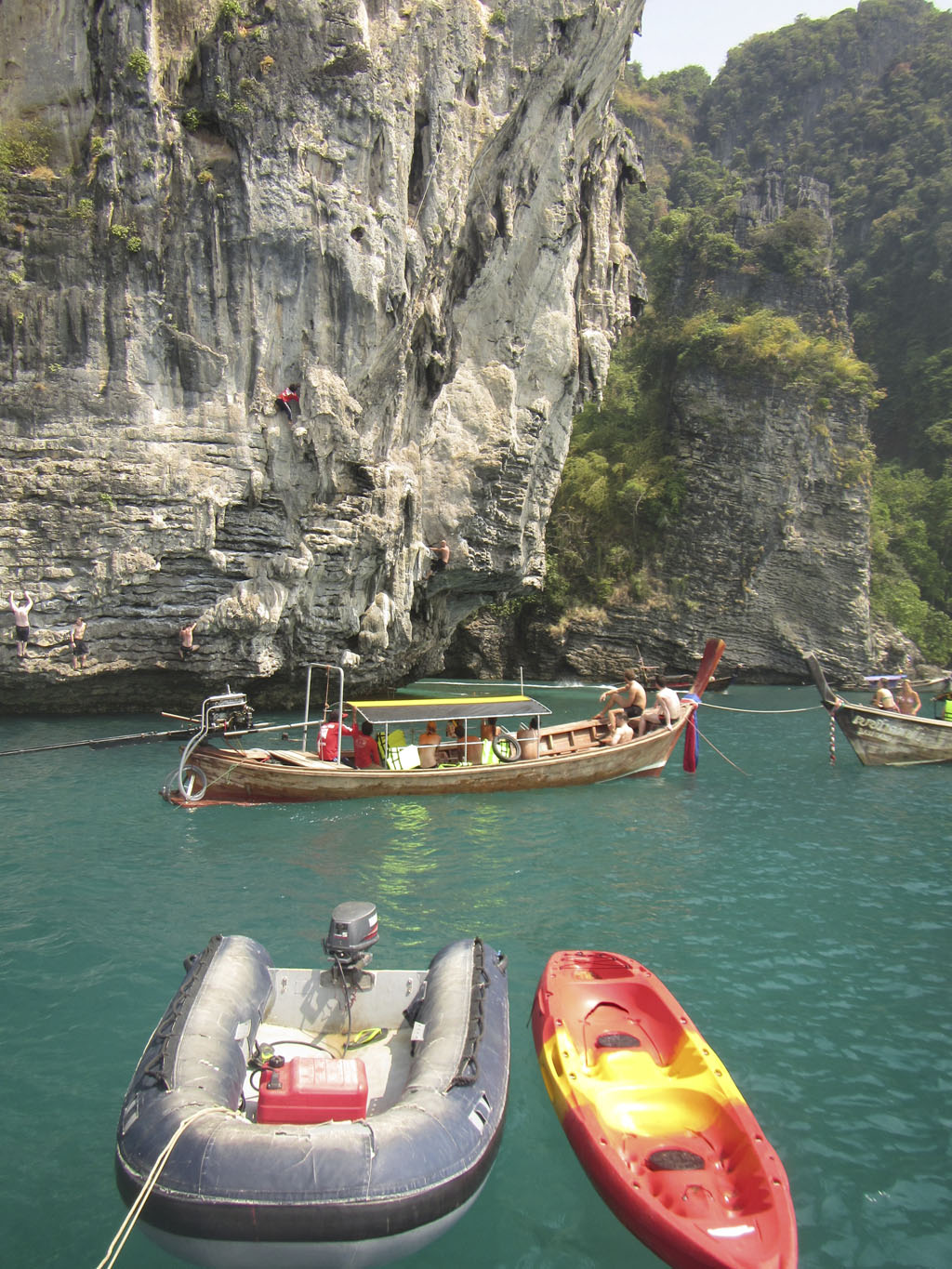 When a couple of longtails full of backpackers arrive, the wall becomes colourfully crowded. There are girls in Brazilian bikinis, handsome Latin boys standing on rock ledges like Greek gods, guys with tattoos and topknots, even a woman climbing in a fluoro lifejacket.

Most impressive are two Thai climbing guides, barefoot and dressed in long-sleeved shirts and track pants, who step out of a sit-on-top kayak at the base of the wall and climb like Spidermen up and up; one of them even swings from one arm 10 metres above the Andaman Sea. When he finally jumps, he’s so high it takes him FOUR SECONDS to hit the water. The other skillfully down-climbs all the way back to his waiting sea kayak. That’s deep-water soloing in style: when you don’t even get wet.

After a quick lunch of fried rice and cold beer back on the boat, there’s time to go snorkelling and to sea kayak to a nearby beach, before we have to head back to Railay. I think I understand the Tonsai attitude better now. Climbing is one thing. Cliff-jumping really is another. And deep-water soloing is something else. 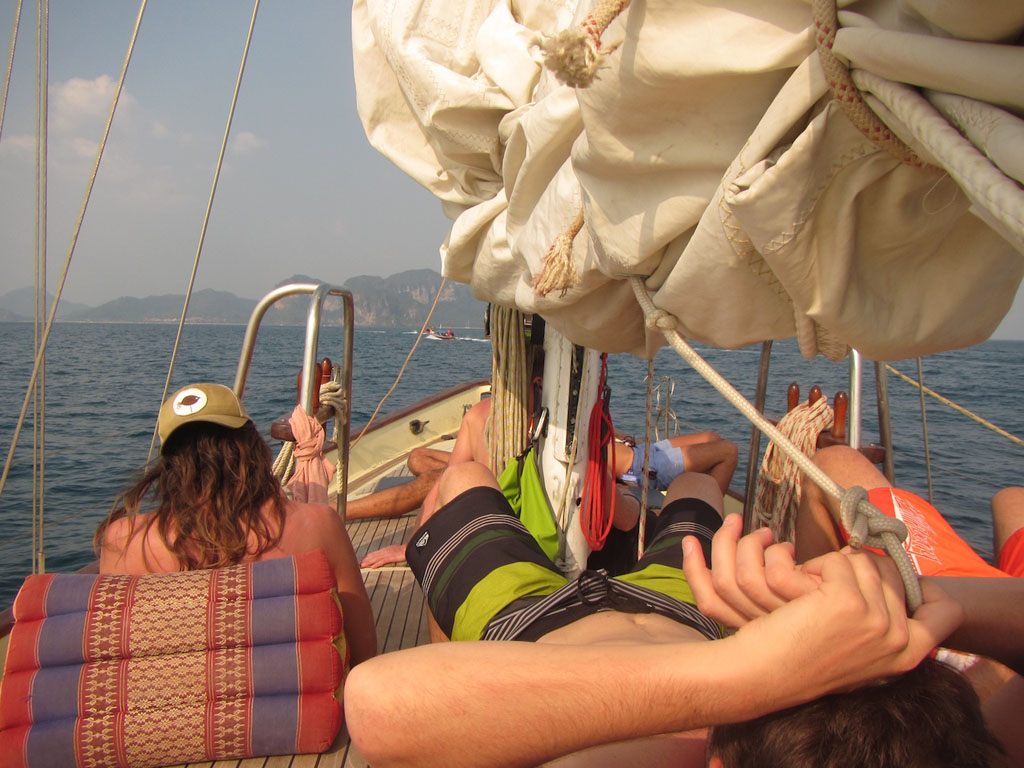 Getting there: Fly from Bangkok to Krabi, then take a short taxi ride to Ao Nang beach and a longtail boat to Railay. Hot Rock Climbing School in Railay offers deep-water solo day trips that include sailing, kayaking and snorkelling in addition to climbing. The best time to climb is November-April. See www.railayadventure.com