Koh Samui is located off the east coast of Thailand’s Kra Isthmus and is Thailand’s second-largest island after Phuket. The population of is 65,000, but around 1.5 million tourists visit annually. It is only a small island – about 25 km long and 21 km wide – and so a round-island trip, with breaks for sightseeing, takes just a few hours. 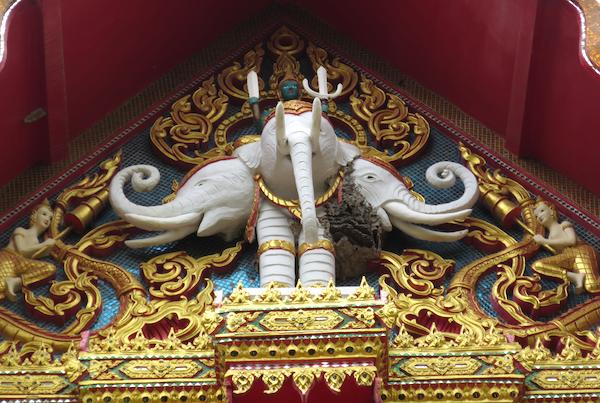 On arrival at the wharf, we were of course bombarded with people wanting to sell us taxi tours of the island. We settled on a young guide called Om who proved to be a very good driver and tour guide, sharing plenty of information about the island and endlessly patient with our requests for photo-stops.

There are many Buddhist temples on Koh Samui and at least twenty-five of them are worth visiting if you have the time. 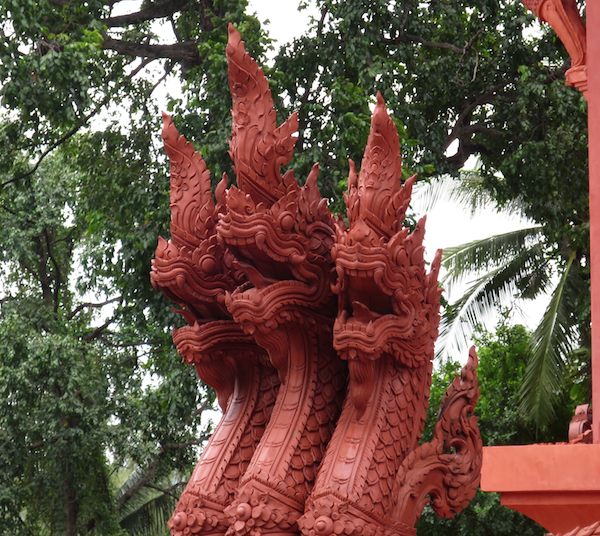 The graceful lines and colours of temples have underlying significance. The use of ornamented multiple tiers is reserved for roofs on temples, palaces and important public buildings. Two or three tiers are most often used, but some royal temples have four.

Possibly the most popular temple for visitors on the island to visit is this Laughing Buddha at Wat Plai Laem. 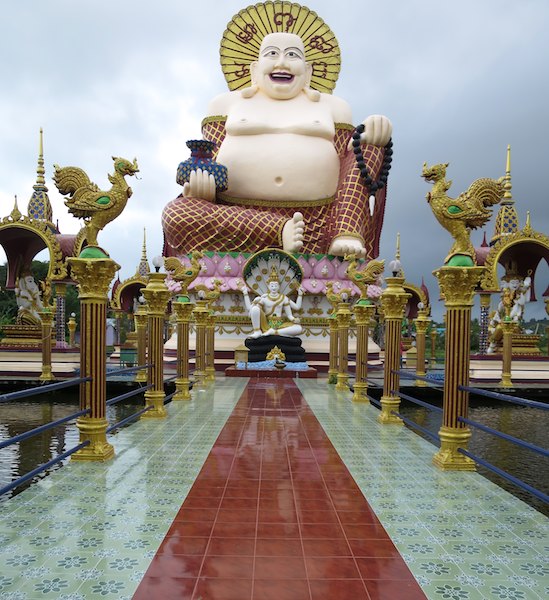 As we travelled on around the island we stopped by to see Wat Sila Ngu a red terracotta temple, intricately carved. Each of these marks has been cut by artisans using blades and chisels, and the craftsmanship is amazing.

Wat Khun Aram has one of the world’s most bizarre relics. The body of a mummified monk, a highly revered former abbot of the temple who was also a meditation master, and able to predict his own death, has sat in this glass display since the 1970s. Devotees bring flowers and incense in tribute. 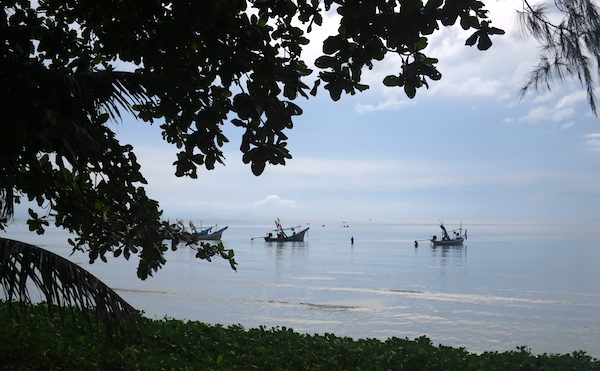 Back in the port of Nathon, we are reminded that many visitors come to Koh Samui not to see Buddhist temples, but for its beaches and watersports. Others come for diving and snorkelling around the more than forty breathtakingly beautiful islands in the vicinity.

Pattaya lies at the top of the Gulf of Thailand, technically in the Bay of Bangkok, a couple of hours drive east of Thailand’s capital. To the north is the luxury area; south is the place for ‘night walking’; and the centre is home to shopping malls. 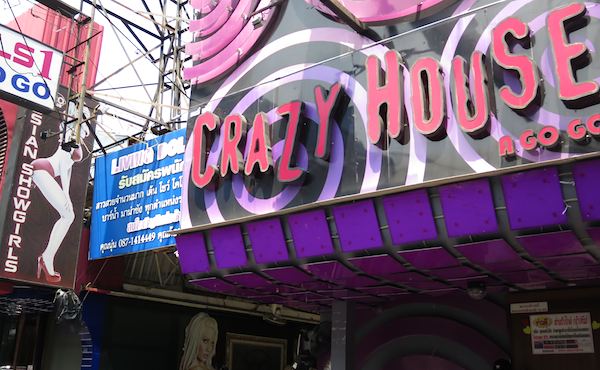 While many people think only of the colourful side to Pattaya, there is more to it than that. At Wat Khao Phra Bat, at the Monument of Kromluang Chomphonkhetudomsak, the founding father of the modern Thai navy, locals pray and burn incense. Nearby, noisy fireworks erupt at regular intervals from a brick tower, as a sign of respect.

The view back across Pattaya Bay from Phratumnak Hill is a great place to come to enjoy the sweeping view, especially at sundown which is so popular that sunset times are posted here. Stay on to see the city lights over the water. 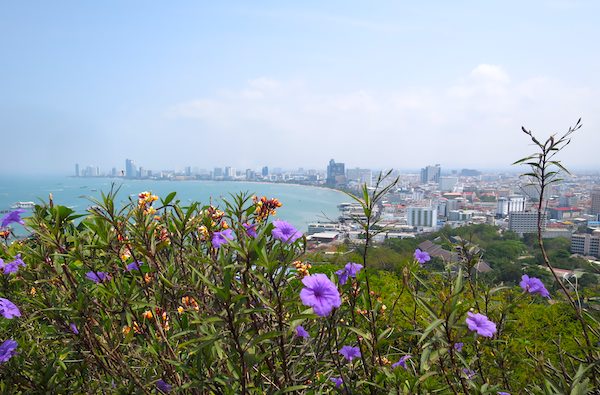 Jomtien Beach, in the southern part of the city, is popular with families, and it’s also the place to come for parasailing, or simply to sit under the many shady almond trees. If you love watersports and swimming, check out the many other bays around Pattaya.

Where there are large groups of people, there will always be food available, street vendors line the beach selling snacks ideal for nibbling as you go. 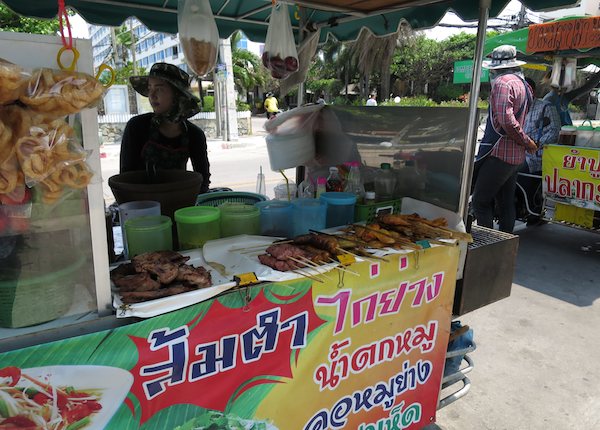 Of course it is not difficult to locate the red light areas, the ladyboy shows, and almost anything else you can think of. The signs are explicit, often in English although many Russians have immigrated to the area recently, so don’t be surprised to see Cyrillic script on signs. Love it or leave it, there is plenty for everyone in this town.

On the eastern side of the Gulf of Thailand in Cambodia, Sihanoukville (pronounced shnookville) was named in 1964 for ruling Prince Norodom Sihanouk. Decades of war and repression now a distant memory, Cambodia is now becoming popular again with tourists, and is not too spoiled. 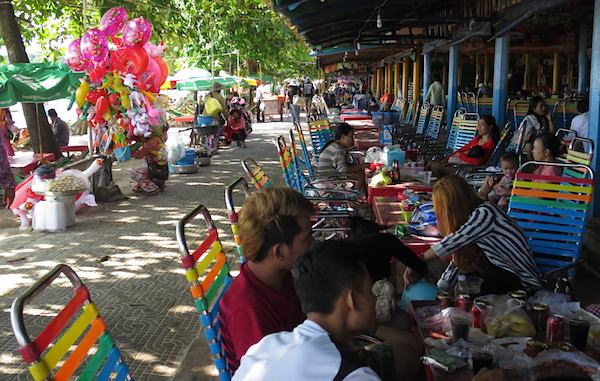 The best way to see the city is to smile and give in to the entreaties of the tuk-tuk drivers posted at any entrance to the city. In our case it was the gates of the wharf, where we hired a man called Mr Li to show us around.

As a market lover, it was a no-brainer to ask Mr Li to take us to the main city market, Psar Lu, where you’ll find everything from fresh produce to glittering jewelry and delicious street food. 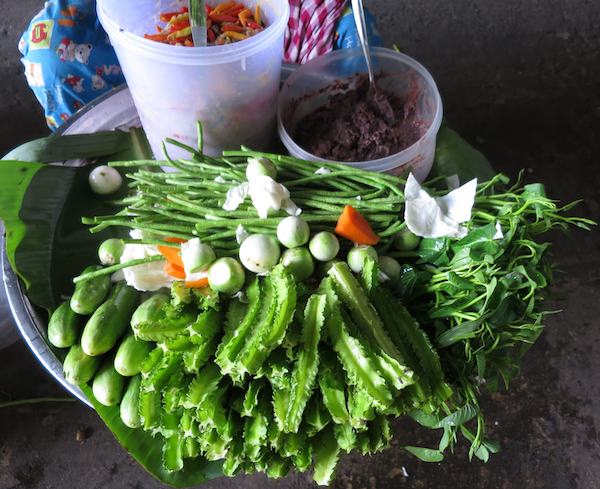 Cambodian food sits somewhere between Vietnamese and Thai food. Build-your-own Cambodian salad, grab a pandan-flavoured jelly and coconut for dessert and maybe a slice of rice and sesame seed cake to take with you and for those with bigger appetites, there is a range of fried fish, meats, breads, noodles and vegetables. 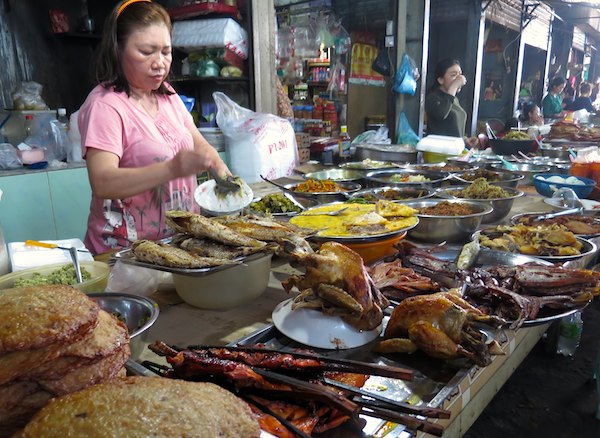 When our driver returned, he promised to show us some of the sights of this town. Constructed in 1996, the prominent Golden Lions Monument (Vimean Tao Meas) is located in the middle of the traffic circle between Sokha and Ochheuteal beaches. The surrounding gardens have become a popular evening hangout for locals, particularly teens.

Ochheuteal Beach is popular with tourists for its shady beachside avenue, with places to relax, buy a cheap meal and even get a massage. Some say Otres beach is better.

The beach is known for vendors who carry their entire ‘shop’ suspended on a yoke on their shoulders, ingredients on the left, and on the right, a charcoal-burning stove. 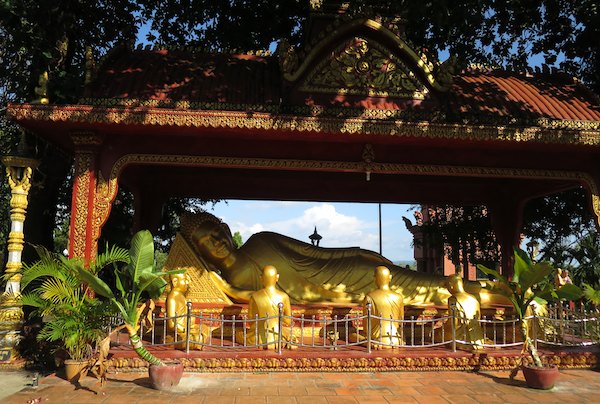 Finally, high on a hill above the town we visit the star in the crown of this city. The Wat Leu Buddhist temple overlooks the harbour and surrounding area. It’s incredibly ornate with Buddhas galore and more gold than most people see in a lifetime.

Calmly making their way through all this, dozens of monks in saffron and maroon robes ignore the tourists and their cameras as they go about their day’s work and studies.

To read the extended version of this article – visit Sally’s blog here.