Guest blogger John Borthwick rides the rails from Bangkok to Chiang Mai on one of Thailand’s best-loved train journeys.

Thailand scrolls past your train window in a sunny morning rhythm of bridges, stupas, paddies and towns. The vision, plus the tune of level-crossing bells, beats the plane or bus show, hands-down.

It’s been too long since I taken the 750-km journey on the night train to Chiang Mai so I head to Bangkok’s Hualamphong station with its grand iron hoop roof. Thailand’s most popular train trip, Special Express 13, the classic night service to Chiang Mai, is waiting, ready to roll at 7.40 pm. I’ve booked a sleeper seat in a four-bunk compartment in air-conditioned second class, where my fellow passengers are a Thai man, Lek, and a Swedish couple. 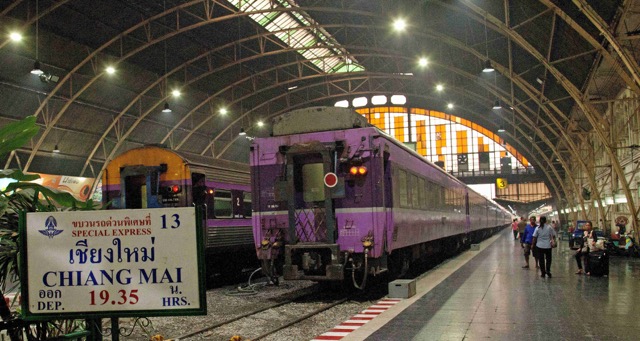 Two friends join the Swedes for a game of cards on their lower bunk so I take a stroll to explore. First class, I discover, seems to be mainly two-berth compartments. The second-class carriages, ex-Japan Railways rolling stock, are clean and have a washroom at one end. Along the corridors I spot plenty of foreign faces — Western, Asian, backpackers, budget travellers and families with kids — all of them keen to see a more real version of Thailand.

Before boarding I enquired at the station if the train had a restaurant car? No. On board I am told, “No restaurant, but you can order dinner and breakfast served in your compartment.” Sure enough, as we roll north past Ayutthaya, the catering staff come to take our meal orders from a set menu. Dinner arrives — I’ve ordered the vegetarian option (at 190 baht). It’s filling but bland. “Like monk food,“ jokes Lek. 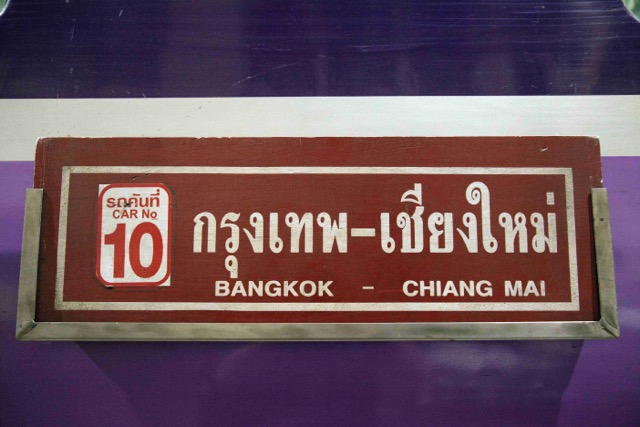 A while later he says, “We can’t smoke or drink on Thai trains anymore. I think I’ll go to the restaurant for coffee.” “What restaurant!?” I blurt. “It’s just two cars ahead,” he says, “Always have restaurant car — you know how we Thais love to eat.” As they say, Amazing Thailand. I join him for coffee.

Around 9 pm an attendant makes up each bunk with a mattress, fresh sheets, pillow and blanket. We rumble through Lopburi and Nakhon Sawan but it is now dark and the towns and temples and jungles slide by out there, unnoticed. The card game has folded. I’ve swapped travel tales with the Swedes, updated my diary and the restaurant has closed. There’s only one thing left to do. I stretch out on my bunk and recall great railroad songs: City of New Orleans, Midnight Special, Love In Vain, Mystery Train … 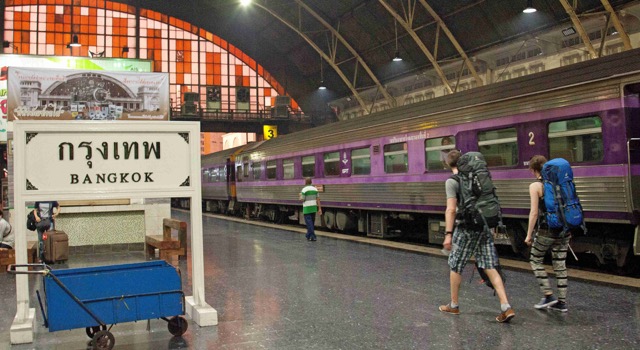 I awake to sunlight on the plains and Den Chai already disappearing behind. At Lampang a large, handsome rooster — a painted statue — on the platform stares in our window. And why not? We rumble on. Tapioca plantations and teak forests slide past as blue ranges rise in the north. Breakfast — salty scrambled eggs — comes and goes, and too soon the outskirts of Chiang Mai are around us. I hurriedly pack, bid farewell to the Swedes and Lek, and at 9.30 am, step from Special Express 13 into a new city.

I look back to see what kinds of passengers our trusty iron horse has carried. So many are foreign that it could be nicknamed the Farang Express.