The capital and most populous city of the Kingdom of Thailand

Everything you Need to Know about Bangkok Areas

Covering an area of 1,500 square kilometres, the greater Bangkok Metropolis fits into the ‘big city’ league with great ease. Add to that an estimated ten million inhabitants, more than 30,000 taxis and an ever-increasing number of tourists, and you’ll soon realize that getting to grips with such a vast concrete jungle is no easy feat, especially if you’re a first-time visitor. This is where our Area Guides come in pretty handy… Certain areas have become more popular than others, largely due to their good location and the things there to do and see — be it traditional attractions, shopping highlights or a notoriously famous nightlife scene. Navigating this exciting city has also become much easier, thanks to the Skytrain (BTS) and underground (MRT) systems connecting large areas. Get to know Bangkok a little better before your trip.

The longest road in Thailand, both it and its many adjoining ‘sois’ (sub-streets) are poor on traditional tourist attractions but rich in of-the-minute shopping, eating and nightlife. The many fashionable restaurants, bars, air-conditioned malls, luxury hotels and hip clubs give the area a distinctly modern, cosmopolitan flavour. Some of the city’s most sinful spots, red-light districts Nana Plaza (Soi 4) and Soi Cowboy (off Soi 23) are also found here. And little, stress-busting pockets of calm can be found in the sweet cafes, atmospheric restaurants and lush day spas that hide down many of its sois. Making exploring its staggering length incredibly easy is the Skytrain (BTS) that runs through most of its downtown stretch.

Silom is undoubtedly one of the city’s most important financial districts with many bank headquarters, financial institutions and office buildings. Fine hotels, smaller type malls and great restaurants abound in the area too – and then of course there’s the famous nightlife scene of Patpong. Bangkok’s two most sophisticated mass transportation systems – the Skytrain (BTS) and underground – both have Silom connections, which are also conveniently connected by the walkway between MRT Silom and BTS Sala Daeng stations. Siam, Chidlom, Ploenchit, Sathorn, and the riverside are only a few BTS stations away.

Siam is unquestionably the centre of shopping in Bangkok, home to some of the city’s most popular and important shopping centers like MBK Center, Siam Discovery Center, Siam Center, and Siam Paragon. Within Siam Square itself, there is a wide range of shops and services, including restaurants, cafes, designer clothing boutiques, record stores, cinemas, bookshops, a Hard Rock Cafe, hotels and banks. The shoppers vary from young-aged school and college students to office workers, trend-setting city dwellers and, of course, throngs of tourists.

TOP THINGS TO DO

Bangkok began as a small trading centre and port community on the west bank of the Chao Phraya River some 200 years ago. Today, while the city is up to speed with modern times, the grandeur and glory of its illustrious past still prevails. Be it dazzling temples, spectacular palaces, a world-famous floating market or colourful Chinatown, each of these famous places has an intriguing story to tell. 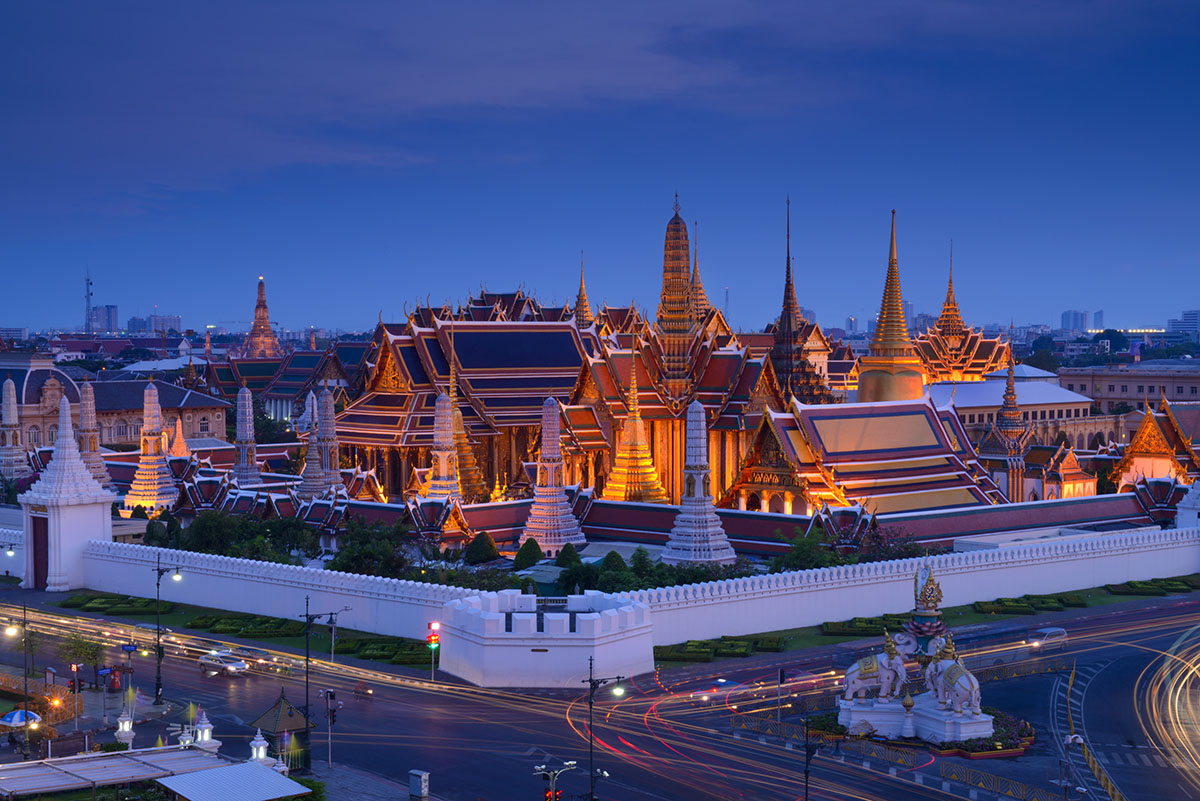 If there is one must-see sight that no visit to Bangkok would be complete without, it's the dazzling, spectacular Grand Palace 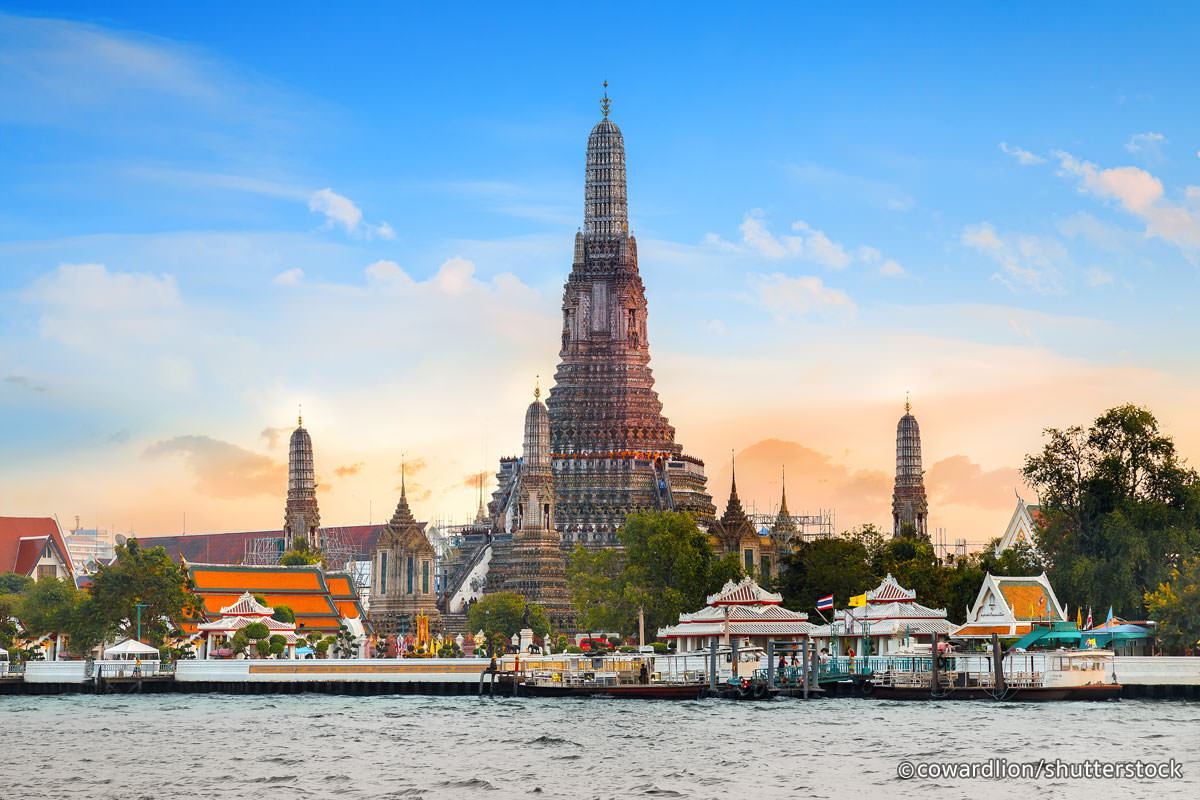 Wat Arun (The Temple of Dawn)

Wat Arun, locally known as Wat Chaeng, is situated on the west (Thonburi) bank of the Chao Phraya River 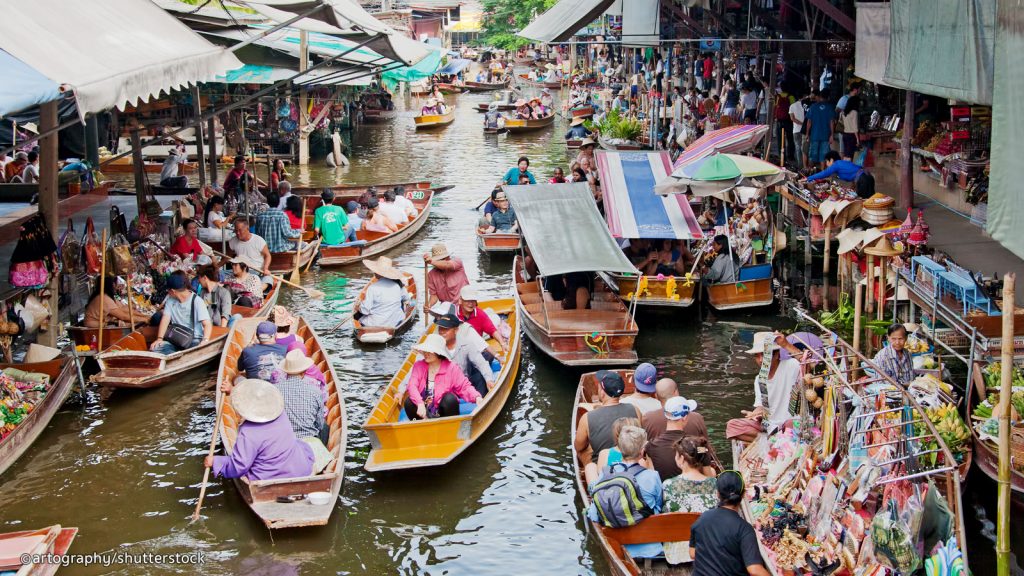 Even though transactions are more concerned with tourists rather than locals these days, the floating market 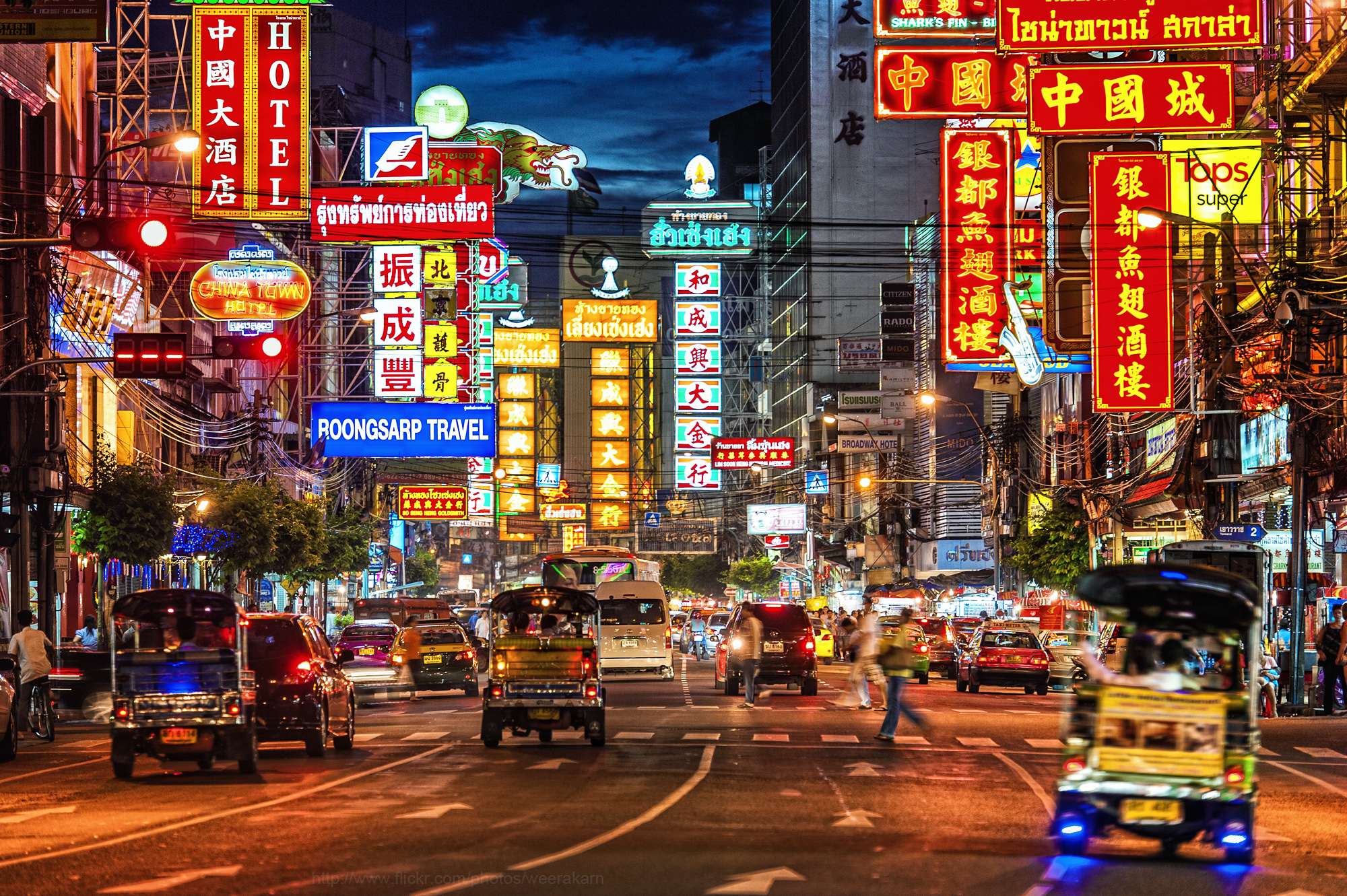 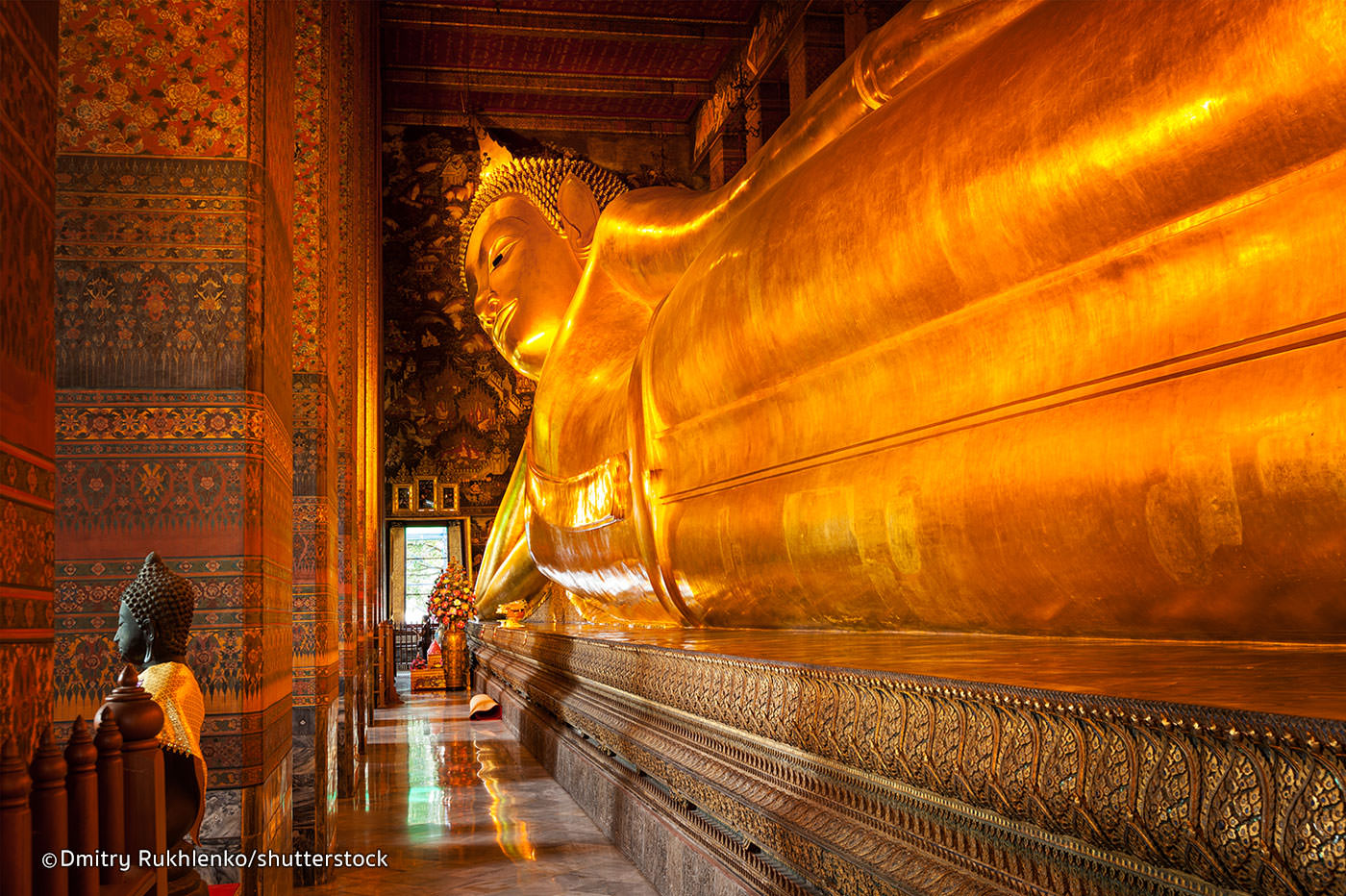 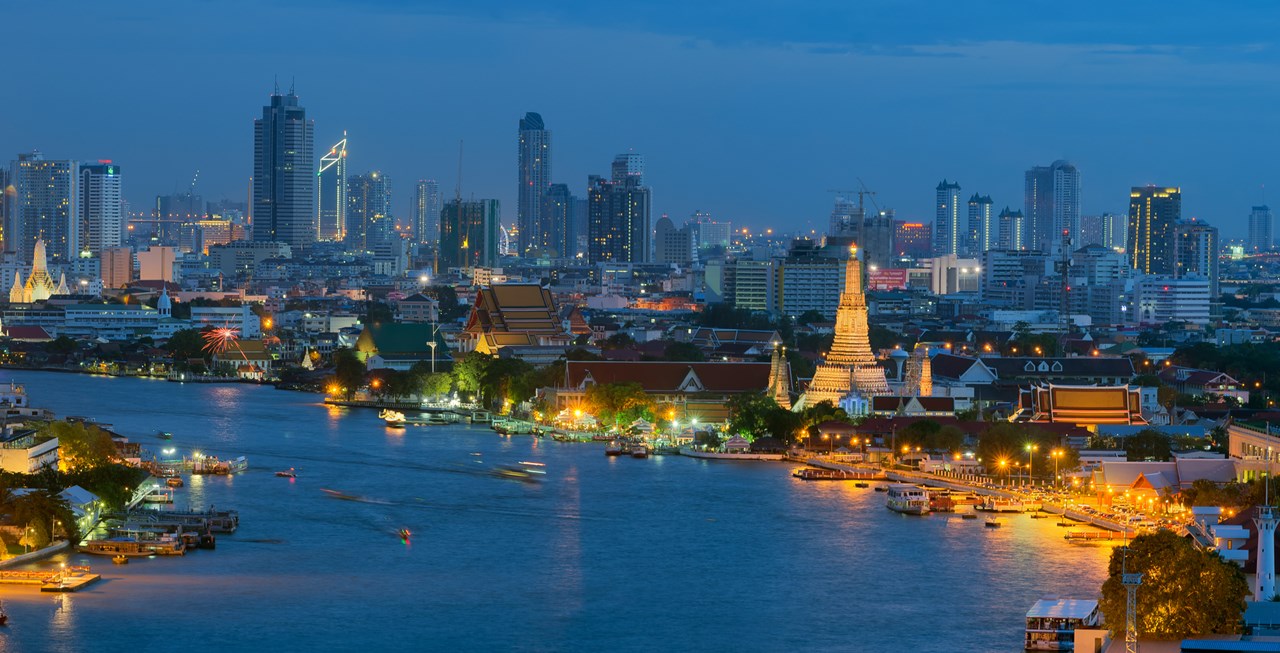 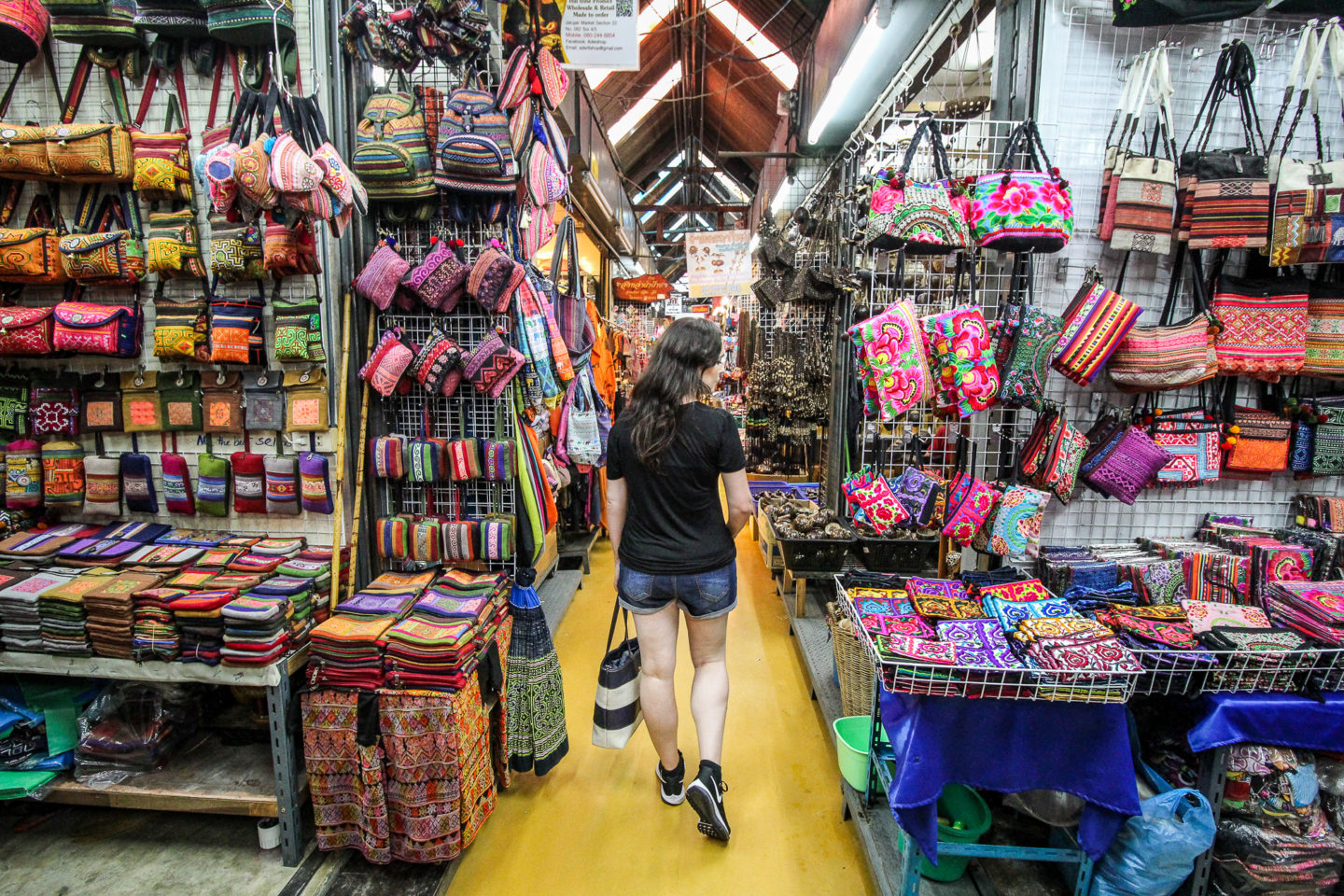 Once only popular among wholesalers and traders, Chatuchak Weekend Market has reached a landmark status as a must-visit place for tourists 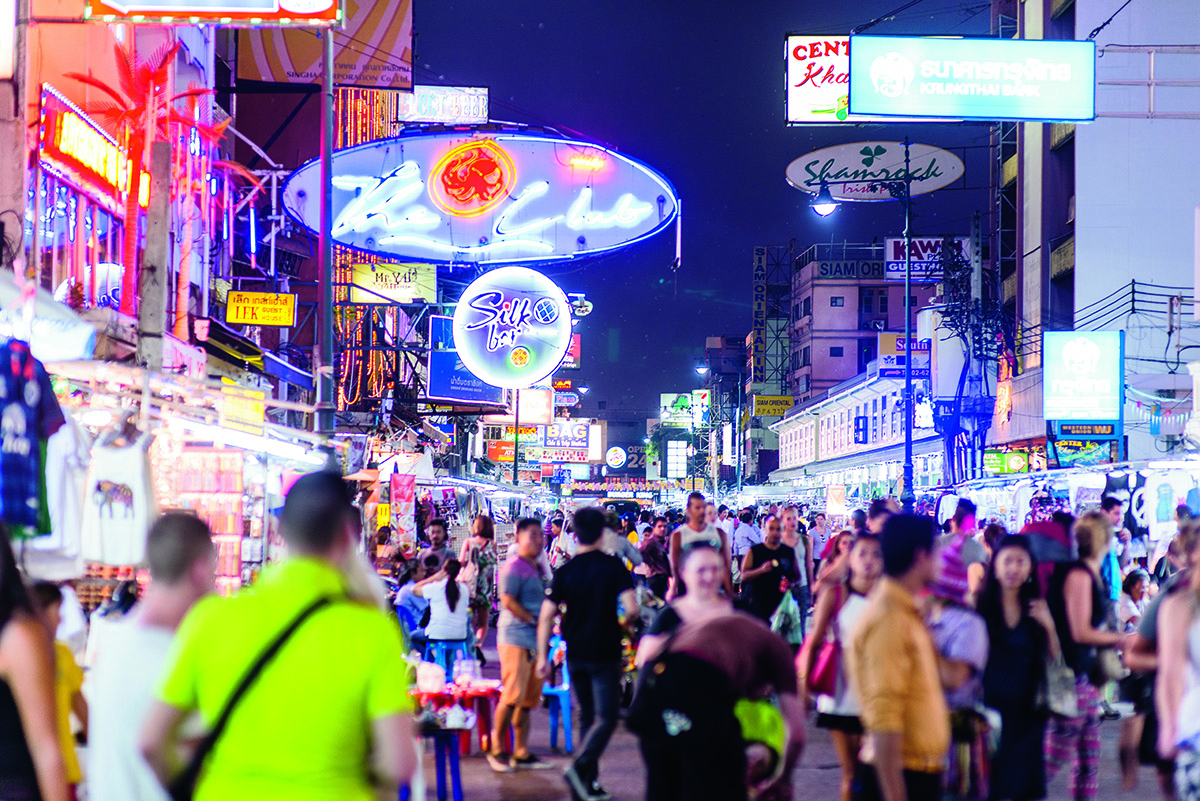 If Bangkok is a city where East greets West, then Khao San Road is the scene of their collision, the place where they jostle for superiority and poke one another in the eye 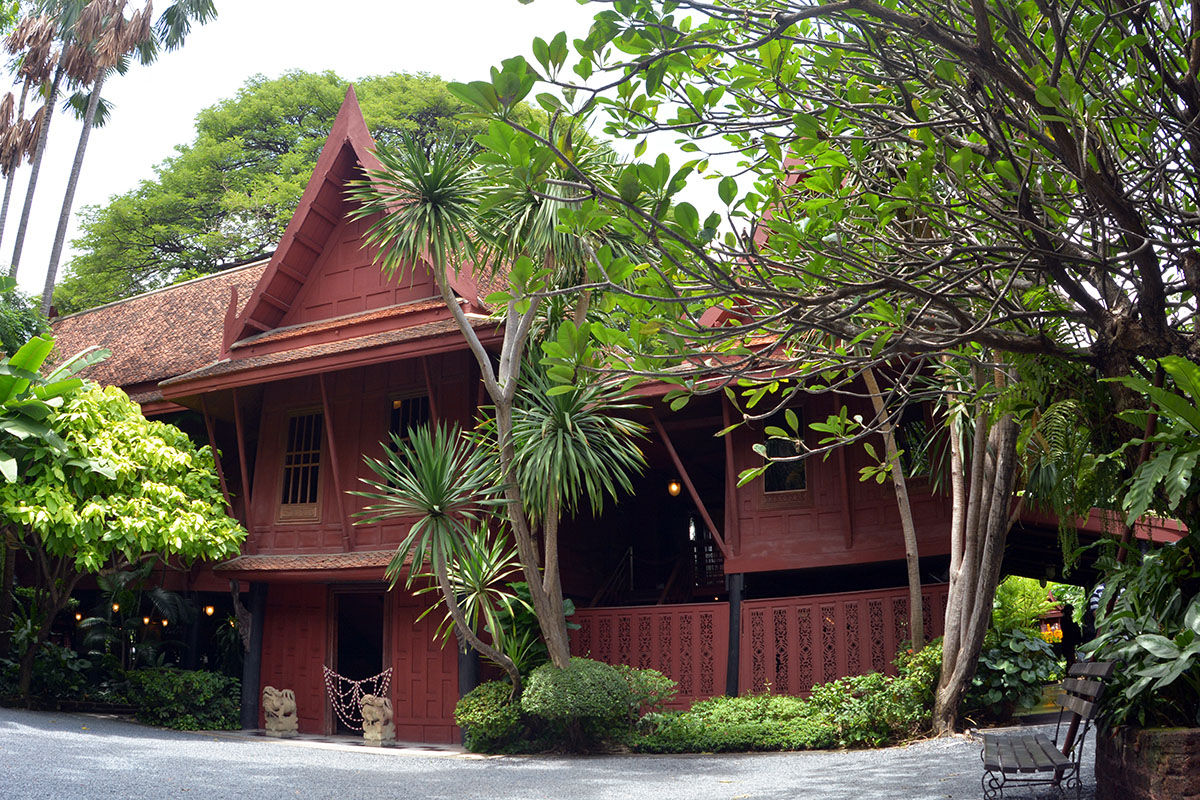 This Bangkok BTS Route Guide has been designed to help you discover all the interesting sites and activities surrounding each station so that you can get more out of your BTS-hopping experience through Bangkok.

THERE ARE TWO BTS LINES:

SILOM LINE runs west to south, between the National Stadium in the Siam shopping area and Bang Wa in Thonburi (across the Chao Phraya River).

SUKHUMVIT LINE runs north to east from Mo Chit to Bearing. The two lines meet at Siam Station, and also connect at two points with the underground (MRT) – at Sala Daeng Station (Silom Line) and Asok Station (Sukhumvit Line). A new train arrives every 3 – 6 minutes or so between 06:30 and midnight. The last train leaves between 23:30 and 23:50. Fares start at 15 baht for one stop (more info about the BTS Passes). 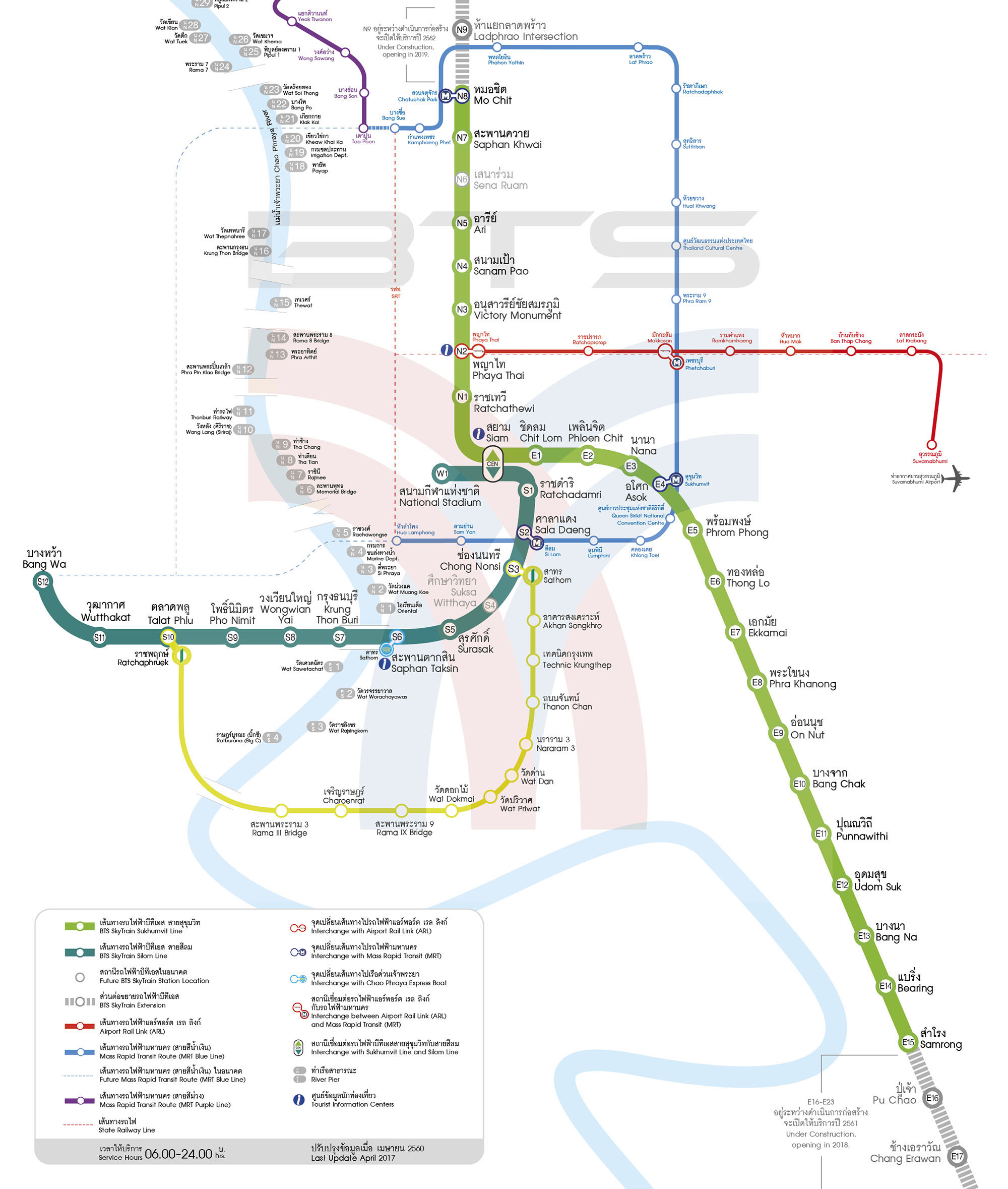 Fast and efficient, the Mass Rapid Transit network (MRT) serves 18 stations and stretches for 20 km in a horseshoe shape from Hua Lamphong in the South (near Chinatown) to Bang Sue in the north. Trains arrive every 5-7 minutes, and connect to the BTS Skytrain at Sukhumvit and Silom stations.

Bangkok MRT Route Guide The Bangkok MRT underground runs underneath Rama IV and Ratchadapisek Roads, the two thoroughfares that cut through the heart of downtown Bangkok. Although additional lines and extensions are in the pipeline, it currently only comprises the blue line, serving 18 stations from Hua Lamphong to Bang Sue. Trains every five minutes in peak times (07:00 – 09:00, 16:00 – 19:00) and every seven minutes at other times.

The Bangkok Airport Rail Link (06:00-midnight) that connects downtown Bangkok with Suvarnabhumi International Airport is a smart alternative to the airport’s express buses or taxis. The City Line makes six stops between downtown (Phayathai Station) and the airport, completing each run in 30 minutes, making this a quick and convenient transport option for getting in and out of Bangkok. The Airport Rail Link connects you to the MRT underground at Makkasan City Interchange Station (MRT Petchaburi Station) and the BTS Skytrain at Phayathai Station. Please note, the baggage check-in at Makkasan Station is no longer available. From Bangkok International Airport (Suvarnabhumi), the entrance to the Airport Rail Link service is on the First Floor.

There are two types of tickets: single-trip tokens and pre-paid Smart Passes. For temporary visitors, single-trip tokens are more suitable. You can buy your tokens from one of the Automatic Token Dispensers located at every station. Simply select your destination and the number of passengers, and the fare will be calculated based on your input. The machine accepts both coins and bills. Always choose to print out the receipt; you might need it later.

SA City Line: Increment rate starts at 15 baht, maximum 45 baht You can also buy your tokens from the ticket booth. In this case, always ask for your receipt.

The Airport Rail Link service hours is 06:00 – midnight If you are traveling in a group of three or more, it’s more economical and convenient to take a taxi. The Airport Rail Link’s pre-paid Smart Passes are not compatible with the BTS Skytrain or MRT underground. You must purchase passes separately. The Express Line closed in 2015. 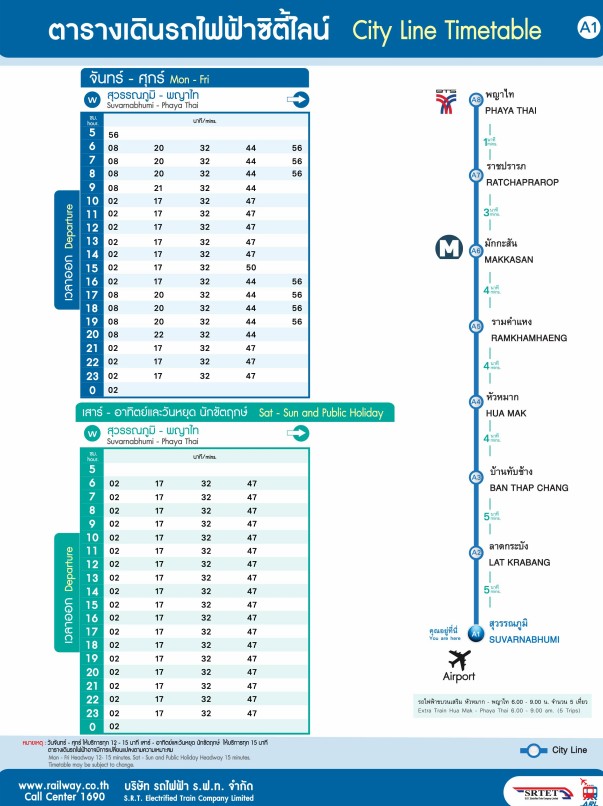 Tuk-tuks or ‘sam lor’ (three-wheeled) used to be everyone’s favourite way of getting around Bangkok before the BTS, MRT and colourful taxis took over. Originating from an old-fashioned rickshaw during the second World War, a tuk-tuk is essentially a rickshaw with a small engine fitted in. Tuk-tuks have become one of Bangkok’s most recognisable transportation features, and are still popular among tourists and visitors. Riding a tuk-tuk is more of an experience rather than a practical way to get around. So, if it’s your first time in The Big Mango, there’s no harm in giving it a go.

10 Things you should know when taking a Taxi in Bangkok

Besides the BTS and MRT, the easiest and most convenient way to get around Bangkok is by taxi. Most taxis are new, spacious and, in addition to the traditional green-yellow and red-blue, they also come in funky colours like bright orange, red and even pink. Finding a taxi is not a hassle, especially around hotels, shopping malls and other tourist attractions.

However, you’re in for a really long wait when it rains, and during rush hours. The fare starts at 35 baht, and stays there for the first two kilometres. Thereafter, the fare gradually works its way up with 2 baht at a time (roughly per kilometre). A surcharge applies in traffic jams (1.25 baht per metre when moving under 6 km per hour). Typical taxi fares for going a few kilometres are around 50 baht. Communication can be a problem with the majority of Bangkok’s taxi drivers as they often speak little English. Improvise, and be imaginative.

Overall, there’s never a shortage of taxis in a city that never sleeps, excepts when it starts raining of course. They’re cheap and available virtually 24 hours a day. Meter taxis now predominate, but sometimes you may have to politely (but firmly) ask them to switch the meter on to save negotiating later. Since taxis are cheap and the drivers work all hours in traffic that is legendary, a small tip is often appreciated.

1. Taxi Colour Codes? Bangkok taxis are famous to be very colourful, especially the pink ones: This means nothing to us, those are just different companies and fares and features are the same.

2. How to Spot Available Taxis Available taxis are the ones with the glowing red vacant sign.

3. Fair Fares No need to negotiate the fare as all taxis in Bangkok are now metered (well, sort of anyway). A driver refusing to use a meter is an indication of a suspicious agenda. If he insists on giving you a fixed fare, instead of using the meter, it’s best to find another cab. Taxis standing by in front of hotels are usually suspicious.

4. Unwilling Drivers Don’t be surprised if the driver refuses to take you where you wish to go. While there’s not much you can really do about it you can report to Land Transport Department Hotline on 1584 and report the taxi if you were fast enough to take a picture of the car plate (plates are both inside and outside the cab). Alternatively you can download this app DLT Taxi to report the taxi. Better try your luck with the next taxi.

5. Flagging a Taxi It’s ok to get a taxi at a bus stop when there’s no bus approaching, otherwise you can expect to be honked at.

6. Taxi Scams Like tuk-tuks, watch out for an over-eager taxi driver who offers to take you to ‘good’ places, skip it or decline! Trust your intuition. If you don’t get a good feeling about a taxi driver, rather wait for the next one. Again Taxis standing by in front of hotels are usually suspicious.

7. Clueless Taxis Don’t expect Bangkok taxi drivers to know the city’s every nook and cranny, as a driver qualification exam isn’t required. It’s always a good idea to carry a map, or the name and the location of where you’re heading to written in Thai. (Pick up a hotel card when leaving your hotel if you are in a small street of Bangkok)

8. Watch when stepping out! Look behind you and make sure there’s no motorcycle coming before you open a car door. It’s very common for passengers to open the door without looking, and have a motorcycle slam into it. This can cause serious injury to the motorcycle driver, the taxi passenger, as well as considerable damage to the taxi itself.

9. Tips? Change? Tipping of taxi drivers is not required, though rounding the fare off to the nearest 5 or 10 baht is common practice (it’s a nice thing to do, as they earn very little, work long hours in often stressful conditions). But remember: Taxis often pretend not to have change, so carry small amounts!

10. Lost Items Before getting out of a taxi, make sure you haven’t left any valuables or shopping bags behind.