Imagine a bike-friendly city and you’ll probably think of, say, Copenhagen or Amsterdam. Not an Asian city, and definitely not Bangkok, that sprawling stopover of a capital inhabited by 12 million people and better known for tuk-tuks than bike trails.

But that’s a perception Jason Williams, an Australian cyclist living in Bangkok, was keen to change when he set up Bangkok-based Grasshopper Adventures in 2004.

The Bangkok Countryside ride he developed back then came about pretty much by chance, he told me. “I was just going out riding by myself, down around the farming areas near where I live and I found these old temples covered in trees as well as great little tracks, canal paths and a sense of being right out of Bangkok despite still being able to see the tall buildings of downtown.” 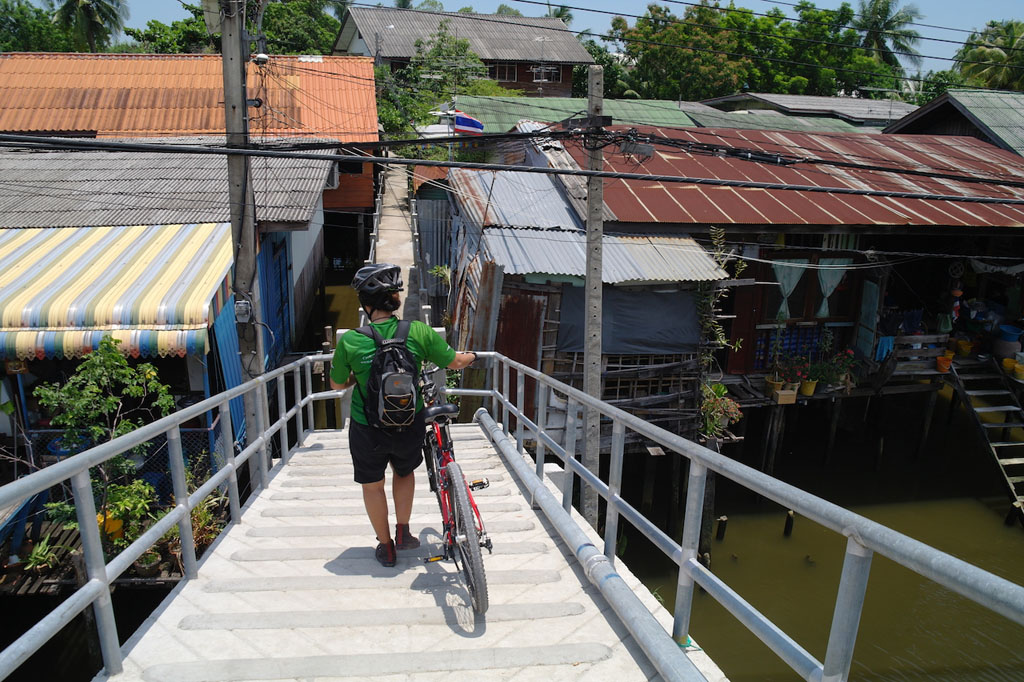 Despite initial scepticism (some Bangkok locals believed the city to be too dangerous for bikes), it’s now the city’s number one outdoor activity on TripAdvisor.

To find out why, I signed up for the full-day Bangkok Countryside ride – with some trepidation because I’ve always felt slightly overwhelmed by the city’s traffic and disoriented by the meandering Chao Phraya River. Could this bike tour convince me of the merits of cycling in a big Asian city? 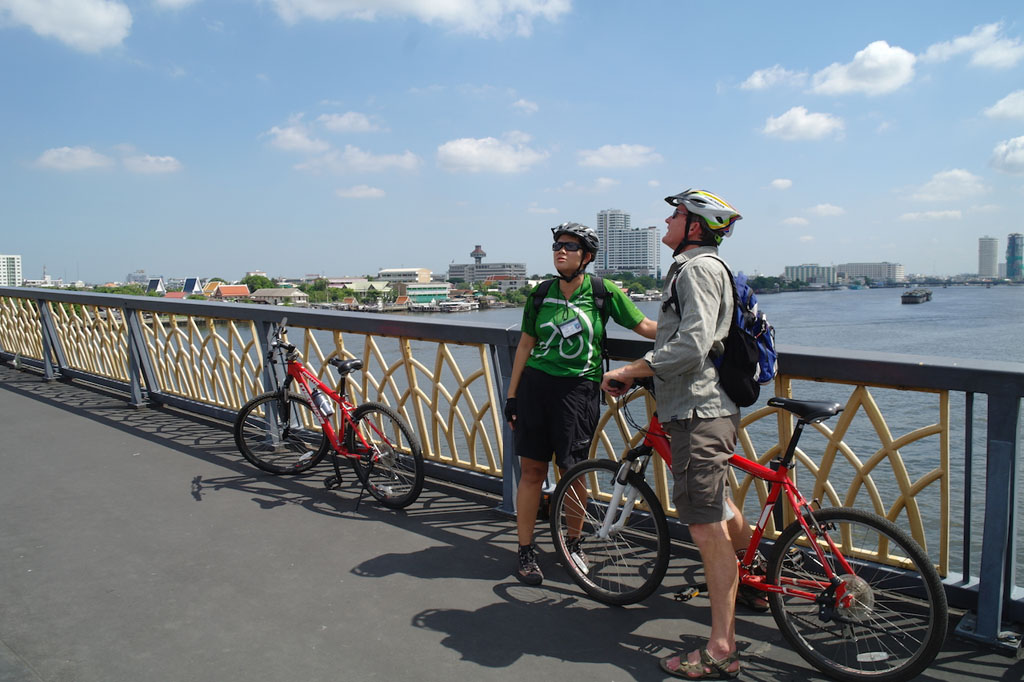 Within minutes of putting on my helmet and pedalling away from the Grasshopper Adventures base near Khao San Road, I learned that while Bangkok may not have dedicated bike paths and cycle lanes like European cities, it more than makes up for that with plenty of bike-friendly footpaths and alleys. Besides, the 35-kilometre route of this tour neatly sidesteps main roads and highways.

Our Thai guide Tammy led our small group first along shady lanes and footpaths beside the Chao Phraya, where we watched barges and longtail speedboats as we rode. Wheeling our bikes up a ramp and onto the Rama VIII bridge for a view, we felt a cooling breeze off the water. Ahead was an open expanse of sky and when Tammy pulled out a map, pointed to familiar landmarks and showed us that the river runs roughly north-south just west of Bangkok’s CBD, I suddenly felt more comfortable than I’ve ever felt in Bangkok. 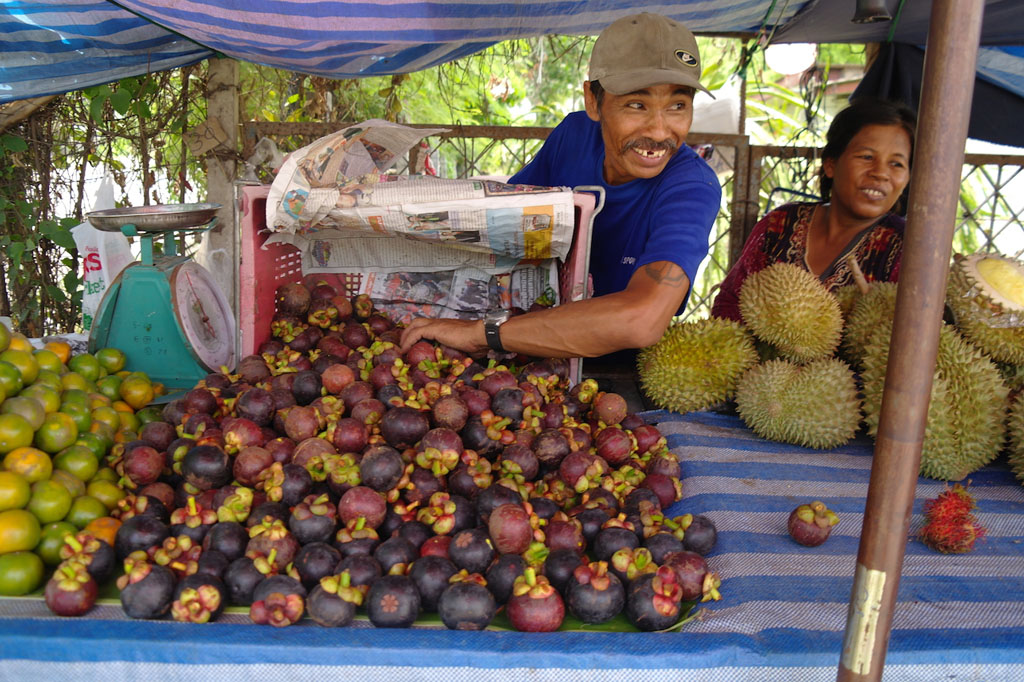 But the best was yet to come. Crossing to the other side of the river, we entered a part of the city usually off-limits to tourists. In fact we didn’t see any other “farangs” for the rest of the day. Instead, we rubbed shoulders with the residents of Bangkok’s ‘burbs and being on bikes made us feel part of the landscape we rode through.

We high-fived kids playing in quiet streets outside their houses, breathed in the aromas of roasting chicken from roadside stalls, mimicked a passing milk vendor’s horn (“Moo!”) and stopped to taste mangosteens and rambutans. Occasionally we’d park our bikes outside a village temple, slip off our sandals and wander in; they were a far cry from Bangkok’s better known, and more touristy, temples. 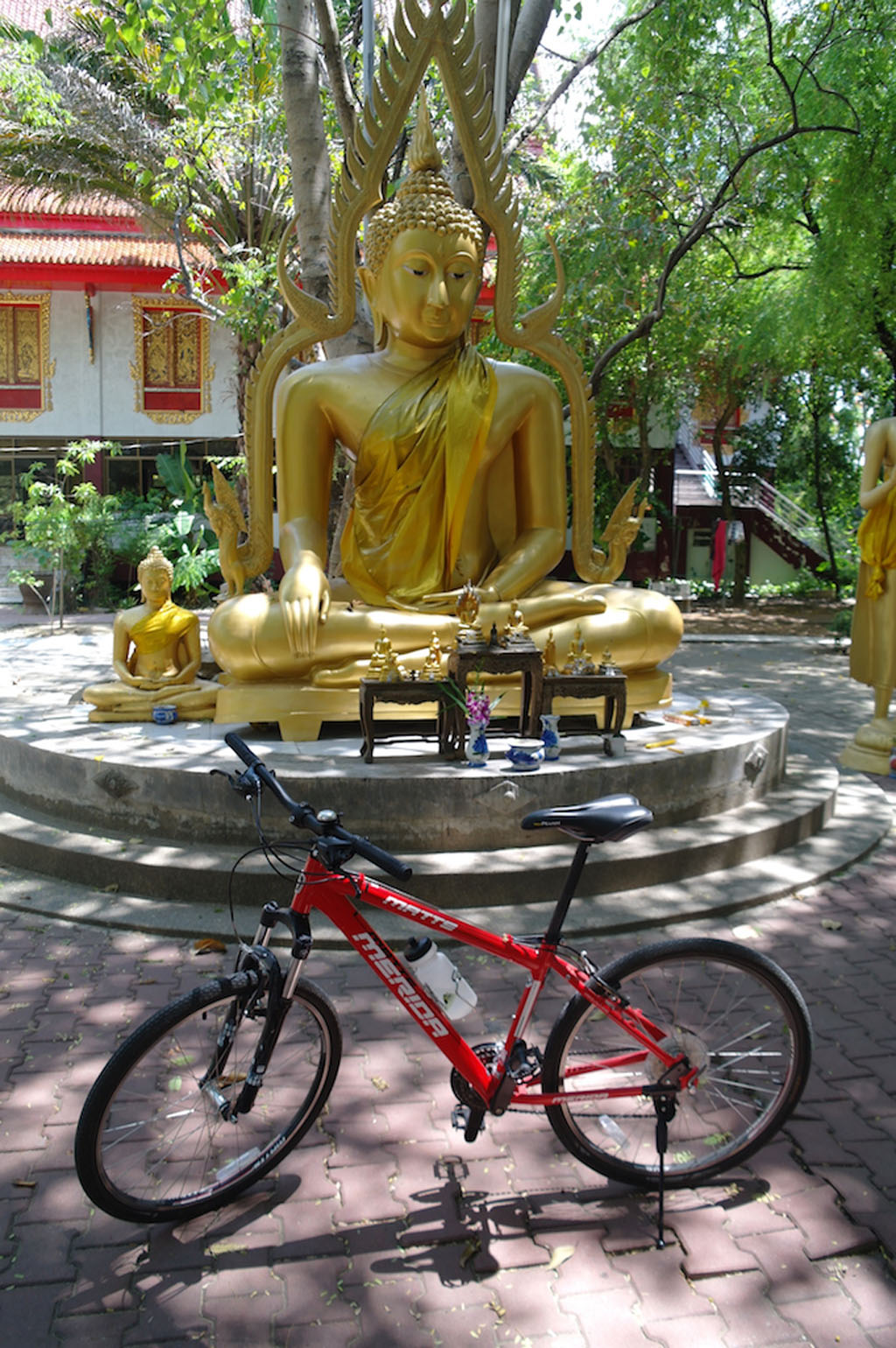 At times the paths we were on were so narrow we had to pull over to let a family of locals on a moped pass. Other times we rode carefully behind men sitting on the edges of canals, fishing with bamboo poles. And all day, people would call out to us “Sawasdee-ka!” and “Sawasdee-krup!” Hello!

Because this is billed as a “countryside” tour, I’d had visions of riding through green fields, passing farmers standing knee-deep in rice paddies and lunching under a tree by a stream while water buffalo grazed nearby. It’s not quite like that. Although we escaped the city’s skyscrapers and shopping malls, the environment we rode through was still an urban one, albeit very low-rise, and our lunch stop was a roadside restaurant (though the pad thai noodles were delicious). 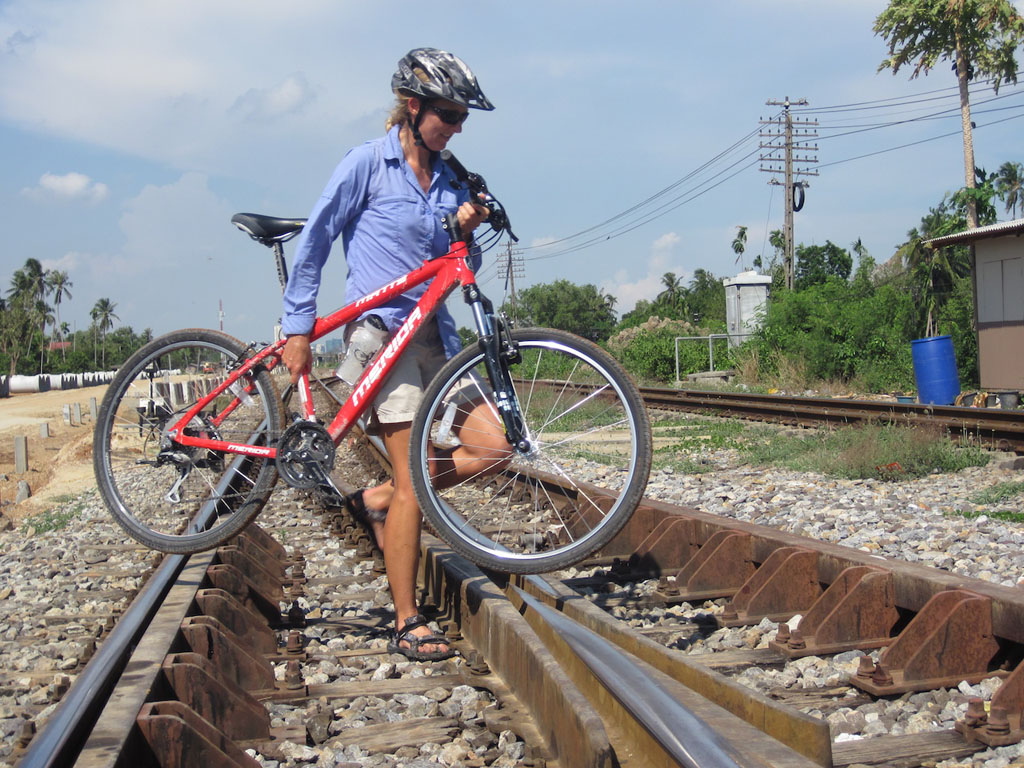 Having said that, it was an adventure, an obstacle course of sorts.

We rode through small patches of jungle, along narrow paths on raised embankments, up and over bridges arching across canals, and down twisting and turning alleys. We passed banana plantations, orchards and ploughed fields and had to carry our bikes over a double set of railway tracks. We even found ourselves, late in the day, on a dirt road made muddy by a truck dousing it with water – and got muddy ourselves by splashing through puddles to cool off. It might not have been the Thai countryside I’d imagined, but it was a Bangkok I never knew existed.

By the end of the ride, my shirt was soaked with sweat and my face flushed from the heat, but I’d do it again (at a cooler time of year, not in May) just for the chance to find serenity on two wheels in one of the world’s busiest cities.

Getting there: Grasshopper Adventures runs several bike tours in Bangkok, including the original Bangkok Countryside tour that runs on Mondays, Wednesdays and Fridays and includes a local guide, a helmet and 24-speed mountain bike, water, lunch and snacks. The best time of year for cycling in Bangkok is November-February. See www.grasshopperadventures.com