Home stay accommodation in Thailand is becoming more and more popular – in fact demand is growing across South East Asia, and it’s not just because it’s cheap. Taking advantage of accommodation like this is a great way to experience what Thai village life is really like, far-removed – but often not far away – from the bright lights of Phuket, Koh Samui, Bangkok and Chiang Mai.

Travel writer Deborah Dickson-Smith sampled the simple life recently, in Koh Yao, only a 35-minute ferry ride from Phuket in Phang Na province. Here’s what she had to say about her experience.

Having left behind a funky new hotel in Laguna Phuket, I make my way to Bang Rong Pier on my way to Koh Lao, not really knowing what to expect of my first homestay experience.

The pier is only a short taxi ride away from Laguna, but it’s a different world. I take a punt that the high-speed boat tied to the jetty is the right one and jump on board with my enormous suitcase.

My instructions are to ask for ‘Uncle Bao’ once I arrive at Manoh Pier on Koh Lao and beyond that I have no idea what to expect, or indeed where to go.

I stand on the jetty looking for someone who looks like an ‘Uncle Bao’, a little concerned I have too much luggage. Uncle Bao’s son, Lee, riding a scooter. He looks at my luggage and scratches his head. “We come back for it.” 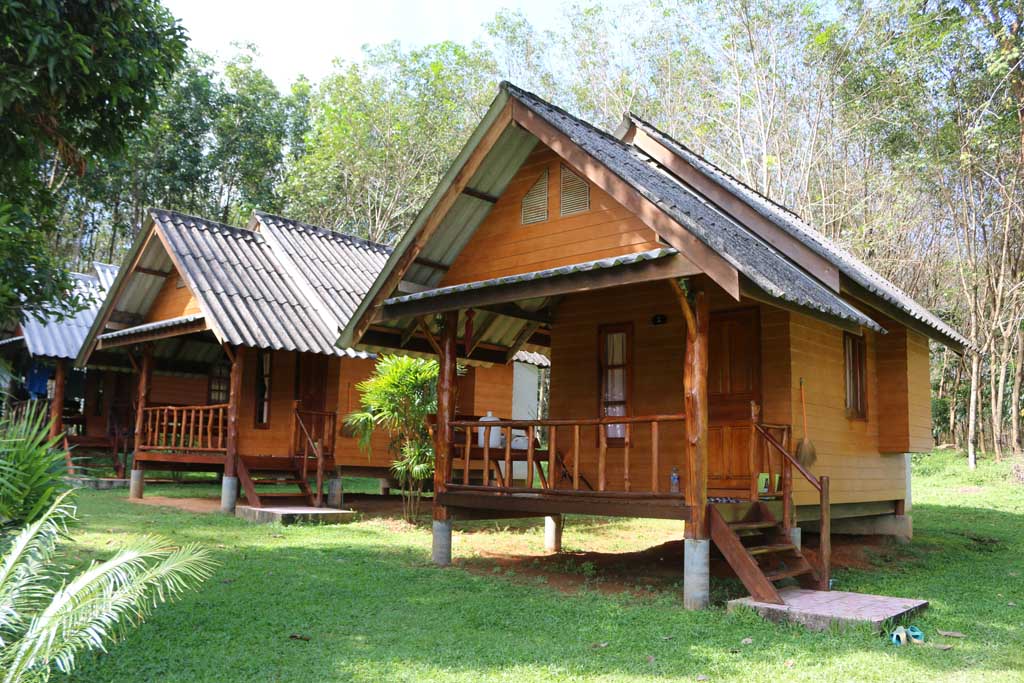 And so we head into town – a few official-looking buildings (school, police station and mosque) and a row of shops surrounded by rice fields. Before long we turn into a grassy driveway and I’m led to my little bamboo hut, introduced to Mrs Bao and told to be ready at 12 o’clock for lunch. Mrs Bao smiles sweetly while her son enquires about food allergies and then he disappears to get my luggage.

I finally get to meet Uncle Bao an hour or so later at lunch in the family kitchen, where he explains village life to me and suggests a few outings. This is a Muslim household and in fact, I learn over lunch that 98 per cent of villagers here are Muslim. 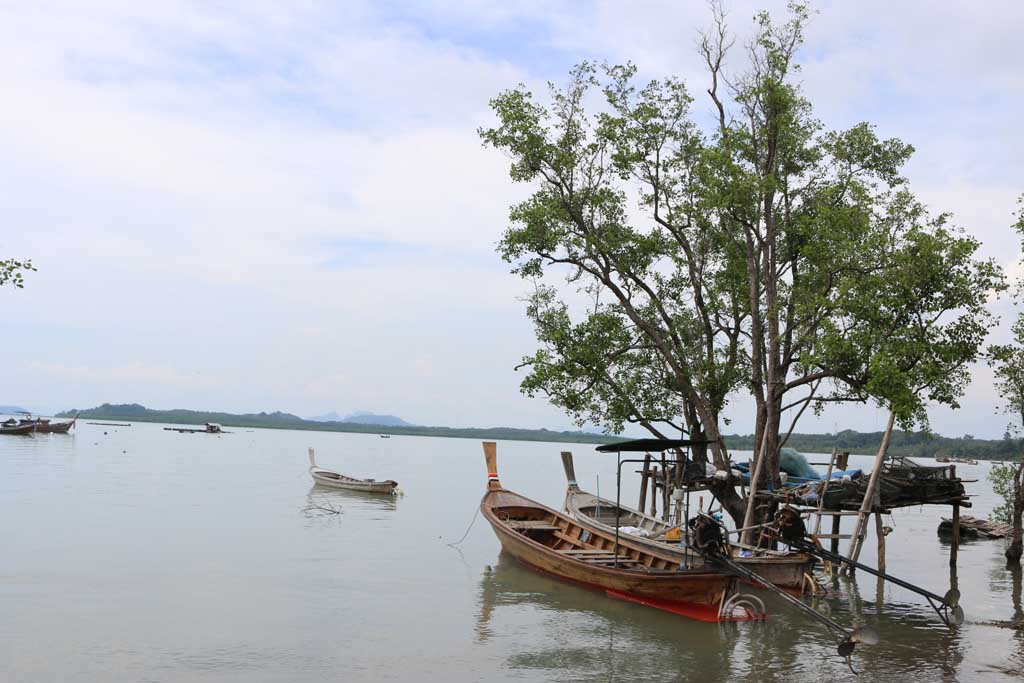 After lunch Lee comes to take me for a tour of the island on the back of his scooter. We head first to a small fishing village, then to a quiet sandy beach lined with cafes and a few souvenir shops and on to an over-water village, built around a long jetty that stretches through mangroves. I’m then shown around one of the rubber plantations that dot the island, competing for space only with rice fields. Rubber is still collected in a coconut husk tacked to the trunk of each tree, the same method used for over 100 years, with the diagonal tracks in each trunk refreshed every morning. 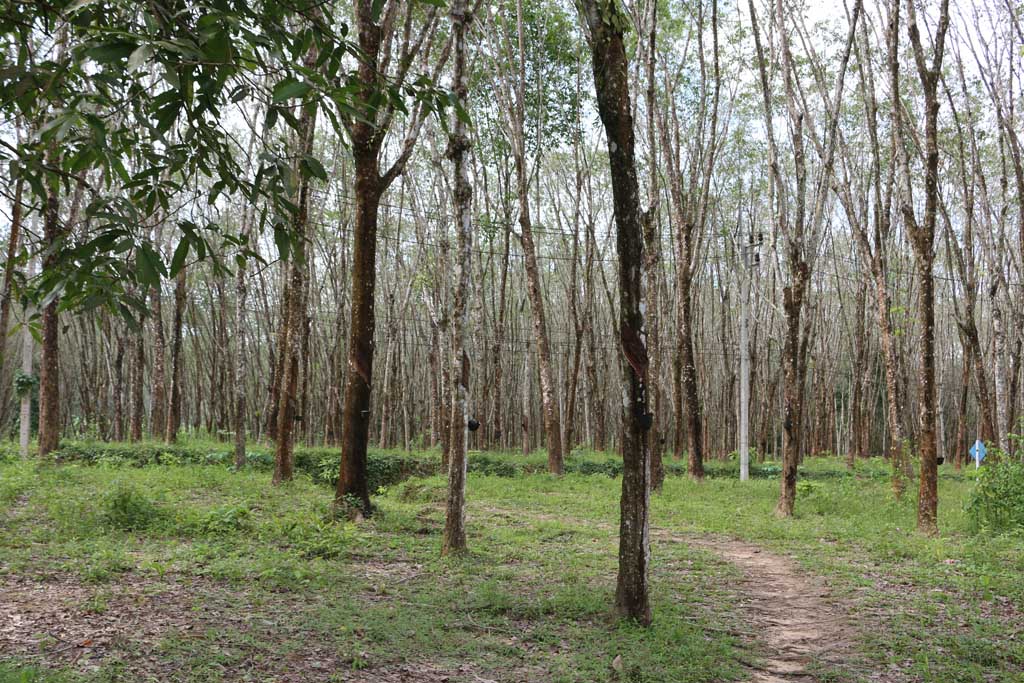 As we circumnavigate this small island I get glimpses of the tall limestone islands of Phang Na Bay which I’m heading out to explore tomorrow, but for now, there’s nothing to do but relax until dinnertime. 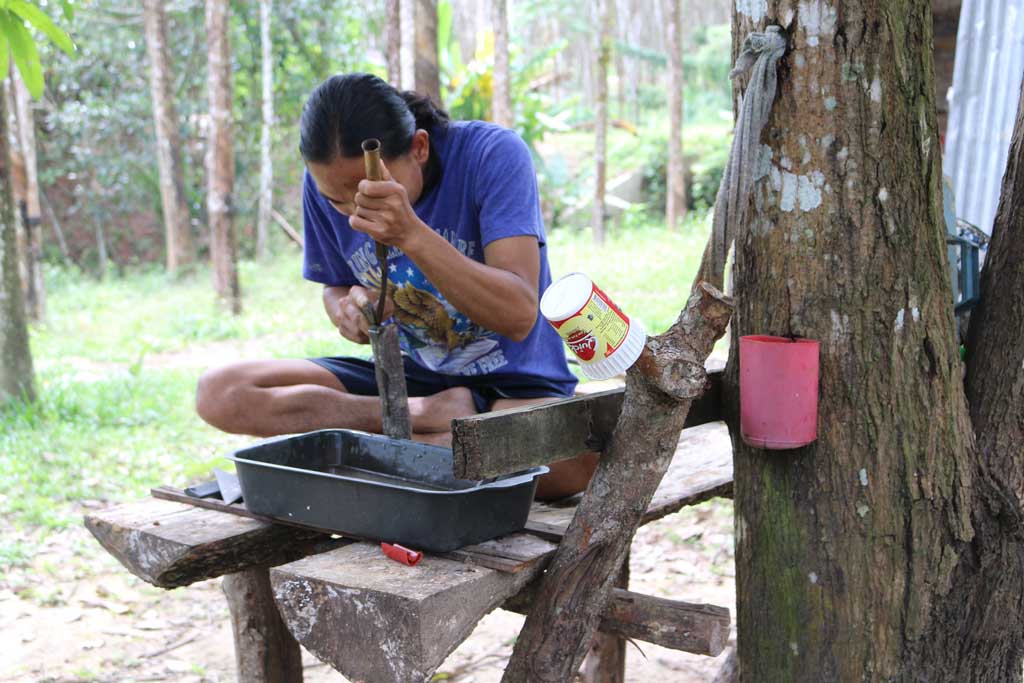 Over dinner I learn a bit more about Uncle Bao’s village, and about Uncle Bao himself. Bao has been running this homestay for over 25 years, having struck upon the idea while trying to protect his previous livelihood: fishing. It was around then that the large commercial fishing trawlers came into the bay and took away the villagers’ livelihoods virtually overnight.

Bao tried petitioning local government to have the boats stopped, to no avail, and so took his fight to Bangkok. It was there he struck upon the idea of recruiting university students to help, and invited groups of students to his village, to see for themselves what was happening, and fight the fight for him in the nation’s capital. 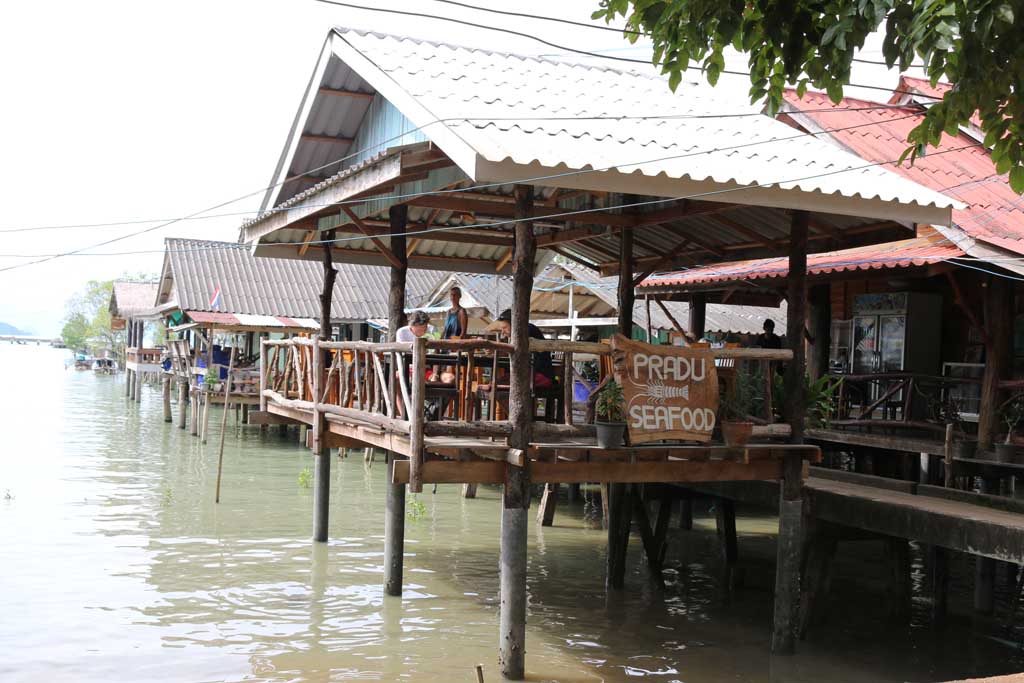 His strategy proved successful in two ways; the commercial fishing boats were eventually prohibited from fishing these waters; and along the way, Bao had discovered a new income stream, homestay accommodation, which was fast becoming popular among the backpacker tourists. Homestays were established in villages all over the island, fishermen returned to work and the villagers were all so grateful they voted Uncle Bao in as their local member of parliament. 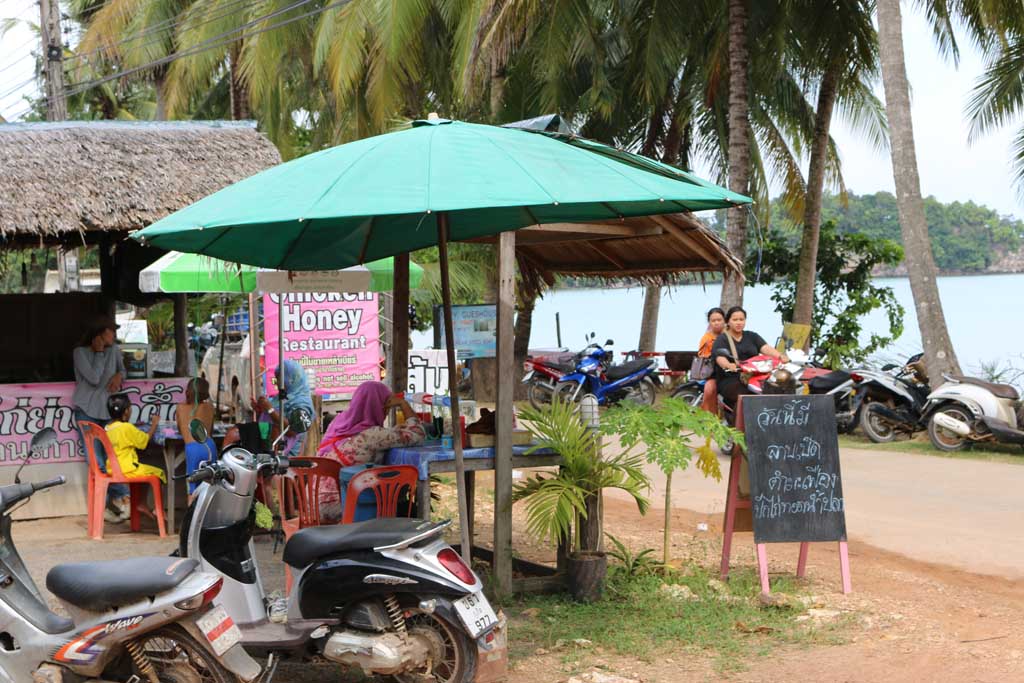 Which brings me here, to this quiet little alcohol-free island, now a thriving tourism destination, far away from the madding crowds of Phuket and Krabi. Where I can spend my days lounging in the hammock on my veranda, maybe go to the beach, wander aimlessly through rice fields and rubber plantations, or take an island-hopping tour of Phang Na Bay. 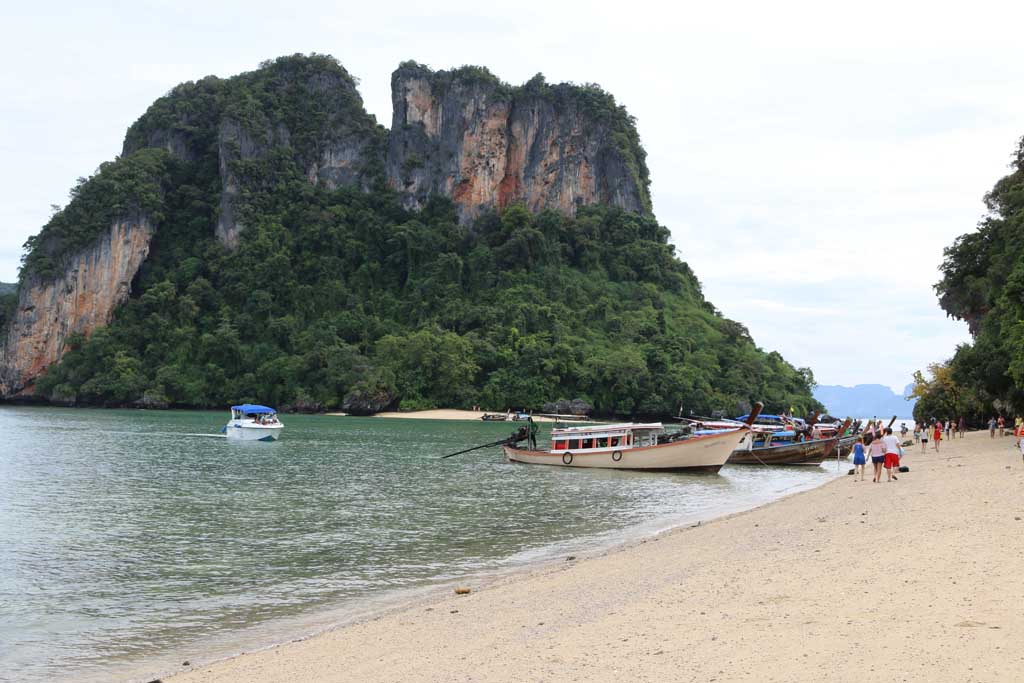 I opt for an island hopping tour the next day, accompanied by Uncle Bao, on a long tail boat skippered by his brother-in-law. We explore a few limestone islands, some with caves and dripping stalactites, some with white sandy beaches and at least one populated with a large family of crab-eating macaques who scramble over the rock s to check us out. 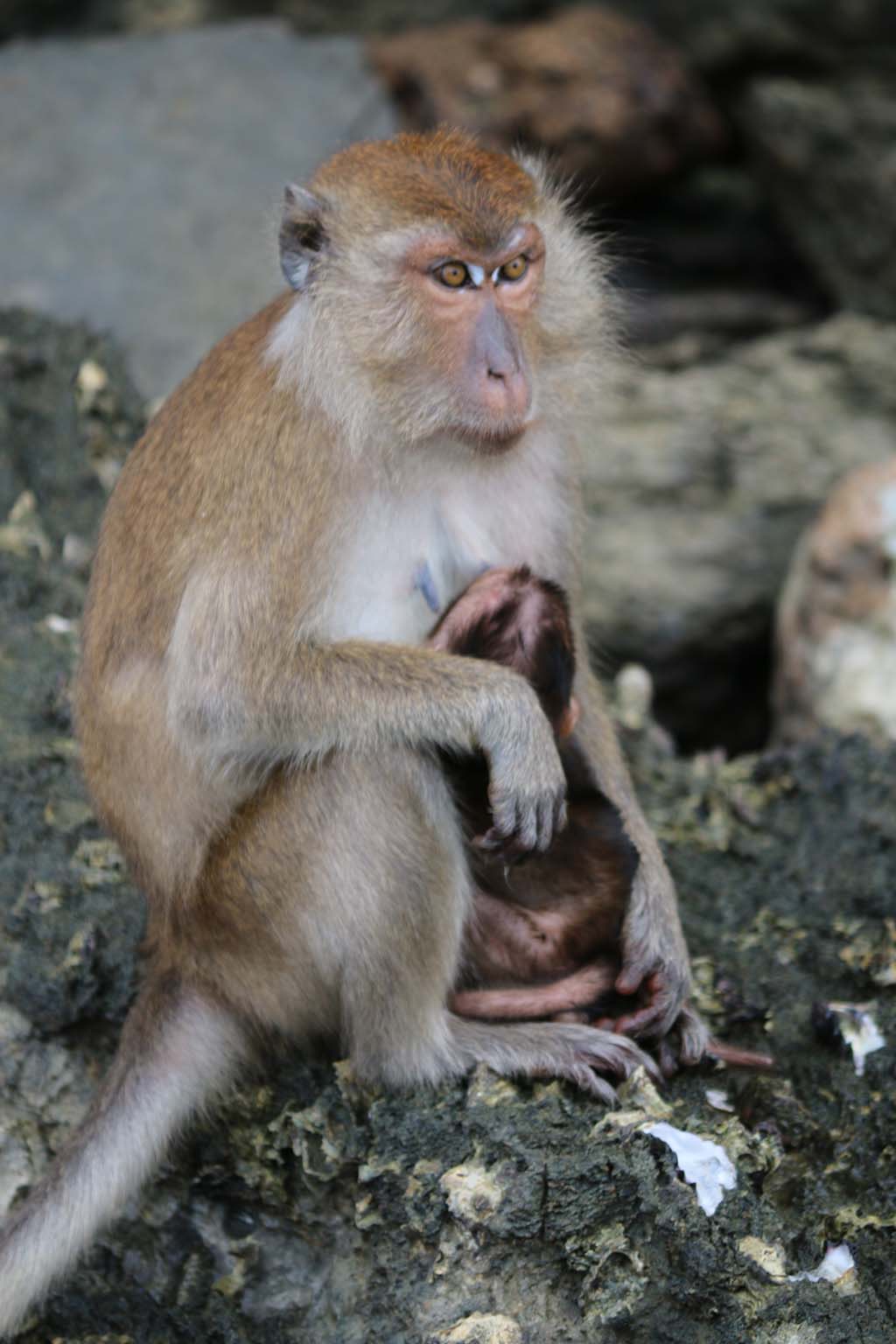 I can’t remember when I last felt so relaxed – and it’s not because I’ve been forced into a digital detox – there is free wifi here, and 3G. It’s just that I don’t feel compelled to use it. I’m inspired by the simpler life around me.

Getting There: Thai Airways fly twice daily from Sydney to Bangkok and daily from Melbourne, Brisbane, Adelaide and Perth. Connections to Phuket are pretty fast and efficient. Ferry transfer to Koh Lao is from Bang Rong Pier.